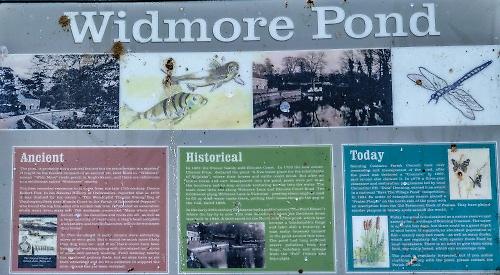 WIDMORE Pond in Sonning Common is well worth a visit. Records show that it existed as far back as 1673 when its owner, Thomas Stonor, of nearby Blounts Court, had it drained and excavated to 60ft.

It is said that after Stonor sold Blounts Court the pond was declared a free water place for the inhabitants of Shiplake to take their horses, cattle and later steam engines.

On one occasion an entire horse and cart disappeared into the pond and on another a man drowned.

In the Seventies, the pond was restored and cleaned, resulting in it winning an award. In the Eighties an order of evangelical sisters placed a praise plaque at the higher end where visitors can sit and read the biblical inscription.

In 1994 a landing stage for ducks and other birds named “Duckingham Palace” was installed.

You can often see quite sizeable carp cruising just under the surface but visitors are asked to refrain from feeding either the fish or the birds with bread, which is bad for them and can attract rats.