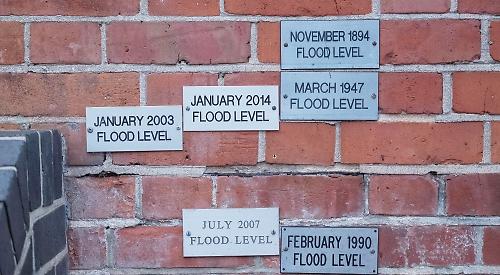 AS we begin another new year, I thought I’d remind you of some years that have been marked by flooding.

There are many flood marker plates on buildings around Henley and a wall of the Hobbs of Henley office by the river has a cluster of them.

As one plate in the picture indicates, the floods in January 2014 were some of the worst.

The towpath was inaccessible and roads near the river were closed to traffic — even Bell Street was shut for a short time. Temple Island was under water, apart from the folly.

Both Hobbs and Shaun Dickens’s neighbouring restaurant were flooded and had to be pumped out.

The town even attracted the attention of BBC television and national newspapers which described it, somewhat predictably, as “Henley-under-Thames”.