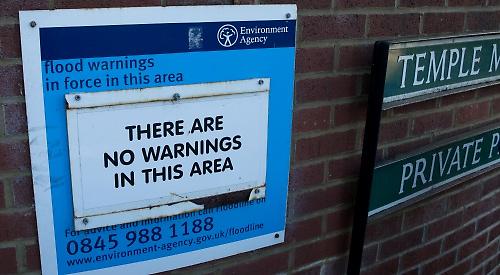 NOT far from the footpath leading under the lawns at Wittington House, near Medmenham, but on the opposite side of the river, is a public footpath tunnel that takes walkers from Hurley into nearby Temple where there are several points of historical interest.

This was the area known for the Knights Templar and Knights Hospitallers who had their main houses here back in the 13th century.

Slightly more recently, and according to Daniel Defoe, there were three watermills at this point on the river which produced paper or worked copper and metal products.

After emerging from the tunnel and walking alongside what must have been a boundary fence, your first sight is of a row of attractive cottages, which were probably where the mill workers lived years ago.

Even Temple Lock has its own peculiarity since when it was rebuilt in 1890 the replacement was constructed alongside the existing one but that was left in place and can still be seen today.

Finally, there is an Environment Agency flood warning board a few metres from here and I wonder if this tunnel has ever flooded. Perhaps some readers who walk it frequently could let me know.