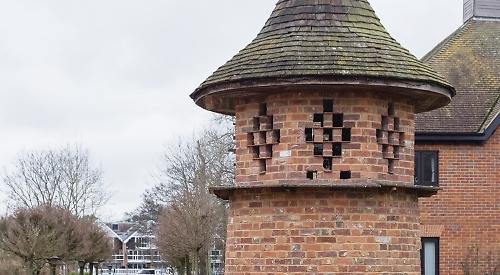 THERESA MAY was merely Home Secretary when she officially opened the riverside flats called Remenham Row in June 2000.

There is a commemorative stone set into the wall to mark the occasion.

However, this is a gated development so if you wish to see it, or the fine old dovecot (right) alongside it, you will need to peer through the railings.

Remenham Row is located a short distance along Wargrave Road, yet such is the geography of this area that the gardens reach the Thames about 200m upstream of Henley Bridge.

The land is opposite the former Two Brewers pub and is where Fred Cook’s plant nursery used to be. I don’t know why the business closed. Perhaps some older readers could put me in the picture.