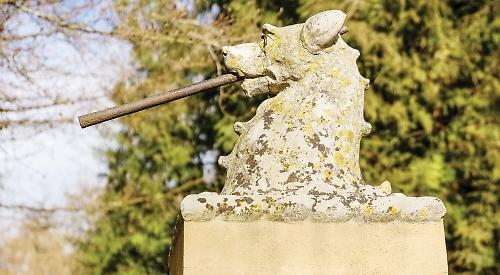 THIS is one of two dog’s heads on top of the gate pillars at the entrance to Crowsley Park in the parish of Shiplake that are reputed to be connected to Sir Arthur Conan Doyle, the creator of Sherlock Holmes.

The author was a friend of the Baskerville family, who owned the grand manor house, so was a frequent visitor.

There was a local superstition that a supernatural hound would be released every few years to wreak havoc, which may explain the heads which both have a spear going through the dog’s head via the mouth.

Perhaps the rumours played on Conan Doyle’s mind mind when he wrote The Hound of the Baskervilles, although it’s set in Devon.

If you go to look at the stone dogs, please be aware that the roads in the area are not in a good condition. Afterwards you may want to pop into the Baskerville Arms in Lower Shiplake, named after the family.