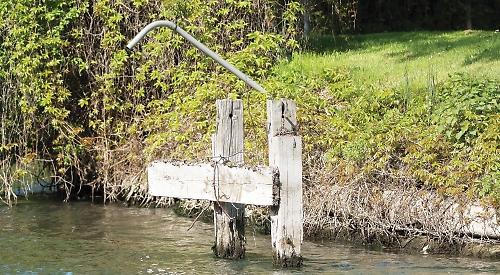 SOMEWHERE around Shiplake Lock Island on the River Thames is marked on old maps as a bathing place.

However, it does not look as if it has been used for a long time.

There was a bathing house here in the Thirties which is now next to what are now showers and washing-up facilities of the camping island.

The tents have wooden floors raised up on railway sleepers and real furniture such as sprung beds.

During the winter the flysheets are taken down and the furniture is packed away for the 14 plots to take a rest.

It has been a camping site for more than a century but in the early 1900s women campers were banned from spending the night on the island and had to retire to wooden huts on the Shiplake bank until the next day.

I am told there is a waiting list to lease these plots and that there is an exceptional community spirit among the plot-holders.

The whole area is kept to a high standard, clean and tidy, and lock-keepers past and present have won Environment Agency awards for this.