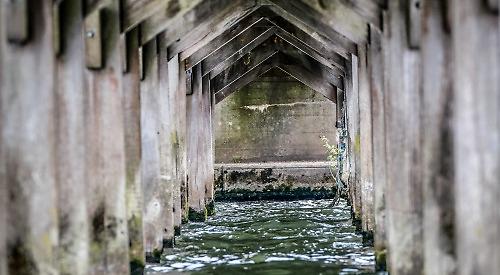 HERE’S a little test for regular readers. With Henley Royal Regatta and Henley Festival taking place a short distance away from where my picture was taken, I wonder how many readers can guess what it is?

The uninitiated might expect the sturdy wooden bridge upstream at Marsh Lock to take the walker to the opposite side of the river in Berkshire. Yet curiously it returns some 300m later to the Oxfordshire side.

It is believed to have been built in 1772 to Henley inventor Humphrey Gainsborough’s design at the same time as the pound lock. The builders were forced to take this route for the use of heavy horses pulling barges because the towpaths on both sides of the river were blocked by watermills.

There is still plenty left from back then. The former mill manager’s house is a fine property and still overlooks the smaller weir. The other mill has been redeveloped into flats with splendid views over another old mill-pool and beyond. The lock itself continues to use the same principles of Gainsborough’s design.

The picture shows the underside of the bridge, as I’m sure you have guessed by now.