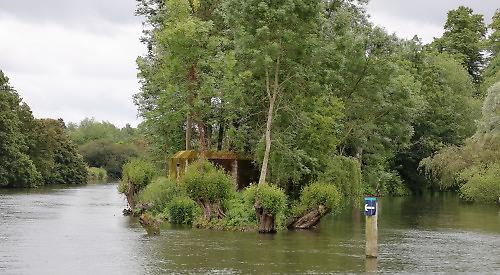 UNTIL recent tree surgery on this Thames island near Goring, I didn’t realise that there was a wartime defence placement there.

The eyot is opposite an original house known locally as The Grotto because it had a grotto with inset shells and rocks as “a place of retirement and pleasure” for Lady Mary Fane, maid of honour to Queen Anne.

The building was subsequently enlarged and eventually became the offices of the Institute for Leisure Amenity Management but has now been empty for 12 years.

If you are on the footpath on the opposite side of the river going towards Goring you will see the derelict remains of the grotto as well as the pillbox on the island, which was previously hidden by overgrown willows.

This was part of the General Headquarters Line of defence against a possible German invasion.