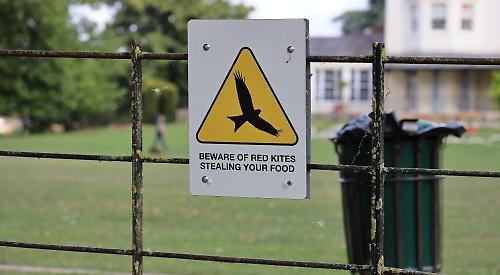 THE fine sight of red kites in the sky around here is partly thanks to the late Nigel Snell, who helped
re-introduce the birds in the Nineties and used to give illustrated talks on the subject.

I’m sure that most readers would agree that this protected species with its wingspan of almost 2m is an asset to the Chilterns countryside.

Since the birds live for 25 years or more it may be that some of the original birds still survive in this area. They have certainly been a success story, illustrated by the fact that more than 300 chicks have been used in Scottish
re-introduction
programmes.

However, like most of nature, these agile birds are opportunistic and there are occasional stories of them swooping down in an attempt to snatch food out of people’s hands.

One place this has happened is Higginson Park in Marlow, hence the sign in my picture.

Let’s hope that we don’t see the same on the Henley riverfront.