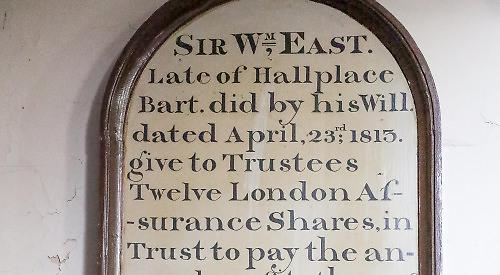 SOME readers will remember the East Arms on the corner of Hurley high street where there is now a housing development named East Arms Place.

Some accounts say that there had been inns on this site since the 13th century.

The Campaign for Real Ale’s magazine reports that the pub was named after John East, who had a toll house built on the opposite side of the main Henley Road, and its closure was a “major loss”.

The Easts were a well-known local family, some of whom lived at Hall Place, a fine mansion which is now the Berkshire College of Agriculture.

It’s probably another member of the family who is recorded on the charity board in my picture that can be found in the church at the opposite end of the high street.