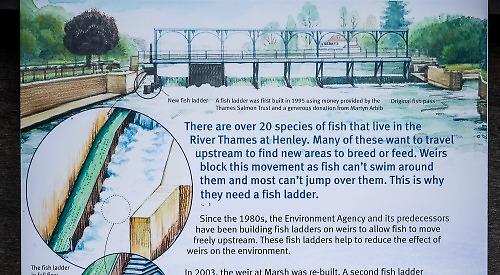 THERE is a fish (or “salmon”) ladder at every lock on the River Thames around here.

These have been installed since the Eighties to enable the movement of some 20 different species of fish upstream whereas beforehand it would have been impossible for them to jump over the weirs.

The ladder at Marsh Lock is accompanied by a plaque stating that it was sponsored by the Arbib Foundation and opened by its founder Martyn Arbib in May 1996.

Another ladder was added in 2003, which has metal plates to help slow the pace of the water, along with green brush material on the side to enable slow swimming eels to slither upstream.

This is a very popular place for walkers and visitors but I don’t know of anyone who has witnessed a fish “climbing” the
ladder.