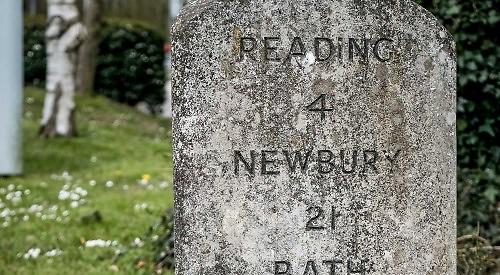 THIS old milestone at the junction of Bath Road and Old Bath Road in Charvil is easily missed.

It seems that Slough was of little importance when this was installed in the 19th century since the east face reads: “Maidenhead 9, Colnbrook 18, London 35” and the west face reads: “Reading 4, Newbury 21, Bath 72”.

The stone is overlooked by a petrol station on what was the main road to Bath, which had a bypass built around 1920 so the road name changed to include the word “Old”.

Opposite is Milestone Avenue, which must have a connection. It’s also next to the Wee Waif Hotel, which was named after the successful and philanthropic local businessman Edward Polehampton, who passed this point as a waif and stray before making his fortune.