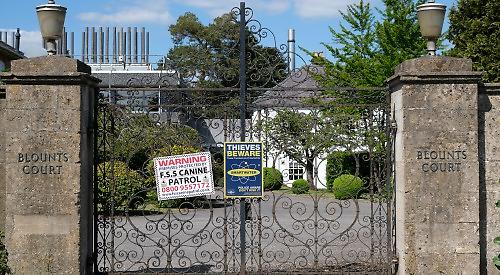 BLOUNT’S COURT in Sonning Common dates back to 1287 and for many years was owned by the Stonor family who were prominent Roman Catholics and supporters of the King during the Civil War, leading to the original buildings being set on fire by Cromwell’s soldiers. It is thought that Charles I planted a tree in the garden here which survived until the early 1900s.

During building work about 30 years ago, a marriage settlement deed from 1605 was found hidden in a wall, going back to the marriage of William Knollys, Earl of Banbury, and Lady Elizabeth Howard. There had evidently been controversy over the paternity of their two sons and they were denied the Banbury title.

In view of the aristocratic families involved and the issue of the Knollys family’s right to the Banbury title, the paper was deposited at the Bodleian Library of Oxford in 2004.

Blount’s Court was a private house or second home/summer retreat until the Sixties when it was used commercially — first, by the American Machine Company, then Brooke Bond Tea and then the current occupiers Johnson Matthey.

The gates in my picture are no longer used.