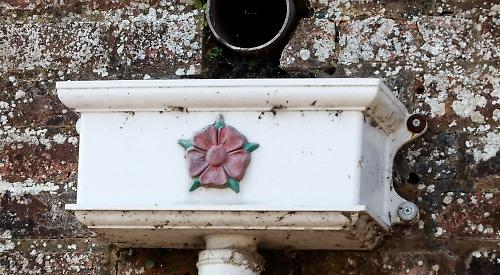 FINE decorated rainwater hopper heads like this one can be seen on Cromwell’s Wall at Phyllis Court Club.

Phyllis Court’s history can be traced back to 1301 when Henley’s Manor here was called Fillets Court.

Like so much history, there seems to be a difference of opinion on the meaning of the original name with theory being that it referred to a crop of hay and another that it’s derived from the old name for a red rose.

The latter might be true since the manor was presented by Edward III in 1347 to John de Molyns, treasurer to the King’s chamber, and the nominal rent was one red rose a year.

The rose emblem in the picture seems to be a variation of the Tudor rose which became a symbol of peace and unity following the Civil War and has been used to indicate a link with the royalty.