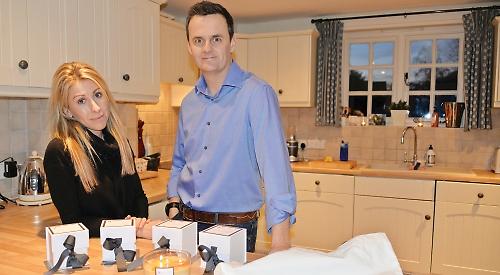 A COUPLE have set up a business selling home-made scented candles.

Mark Alden-Court, a Chinook pilot based at RAF Benson, and his wife Laura launched AC-Scent last year after he was grounded for six months due to an injury.

They had been discussing the idea for some time as Mrs Alden-Court owned a large number of scented candles and her husband believed he could make a better product.

He ordered a test batch of scented oils and soy wax, which is more expensive than ordinary paraffin wax but burns with less soot, and began trying different recipes in their kitchen. After some earlier failures, he continued experimenting until he was happy with the results.

Now the couple, who live in Highmoor with their son Noah, four, are selling candles with different fragrances including vanilla with nutmeg and frankincense with bergamot, which were designed for the Christmas market.

They sold most of their first proper batch of 60 candles and are making another larger batch so they have moved production to premises at Highmoor Hall. The couple live in a cottage on the estate and are friends with the owners Michael and Joanna George. Mr Alden-Court, 47, who has been in the RAF for 30 years, is now back at work but will continue making the candles in his spare time while his wife, 41, is in charge of sales and marketing.

Although their first customers were friends and relatives, they are now selling to other people.

Mr Alden-Court said: “I soon learned that making candles isn’t as easy as I’d imagined. It’s a bit like flying a helicopter as changing one thing has a knock-on effect on other aspects. My first candles were just lumps of burning wax which didn’t smell too pretty but I’m a perfectionist and I persevered until everything was exactly right.

“It was a challenge but there was also something quite therapeutic about sitting at home and playing with all the wax and the scents while I recovered. I would love to see it take off but at some point I’ll have to make a decision about how I balance it with my job.”

Mrs Alden-Court, who works as an executive assistant, said: “I’m really proud. Mark has probably invested more in it than me but we’ve only had good feedback so far and are very excited about the future.”