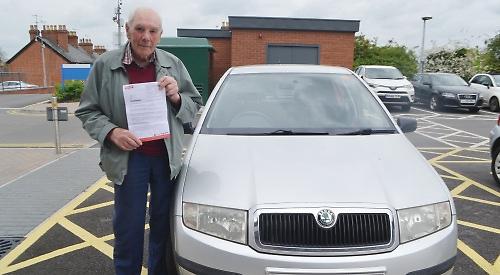 PATIENTS at Townlands Memorial Hospital in Henley have been threatened with court action if they don’t pay outstanding parking fines.

A law firm representing enforcement company Smart Parking has written to a number of drivers who were issued with penalty notices after using the hospital car park.

The letter warns the recipients that unless their fines are paid, the company will take them to civil court to recover the money and even cites a case precedent.

The moves comes after dozens of patients were sent letters by debt collectors over unpaid fines, which many refuse to pay as they say they followed the parking rules.

Drivers parking at Townlands must enter their vehicle’s registration details using a keypad in reception. Smart Parking enforces the car park using automatic number plate cameras and anyone who fails to register, or registers incorrectly, is sent a £60 penalty notice which increases to £100 if it is not paid within two weeks.

The company also monitors the neighbouring Chilterns Court Care Centre and used to enforce the car park of the Bell and Hart surgeries until it was effectively sacked in November following dozes of complaints about unfair fines.

Andy Preston, 50, from Highmoor Cross, is among those to have been sent the solicitor’s letter.

He was fined after taking his wife Tina to an appointment at Townlands in July.

Mr Preston parked in a disabled space, displaying a blue badge, and waited while his wife went to her appointment.

He appealed against the fine but this was turned down by Smart Parking.

Mr Preston received letters from debt collectors in November, January, March and April, which he ignored.

Then last week, he received the letter by Gladstones Solicitors of Knutsford, Cheshire, threatening to take him to civil court to retrieve the payment, which had risen to £160. Mr Preston said: “I’m cheesed off because if you have a hospital appointment you shouldn’t have to pay.

“If there’s no proof you went to the doctors and hospital then okay, that’s fair. They should have checked out to see I had an appointment and the fine should be invalid.

“This has caused unnecessary grief and stress but I’m not going to pay it, they can take me to court.”

Bernard Winnington was fined after visiting Townlands for a podiatry appointment on January 31.

The 92-year-old from Sonning Common went with his wife Barbara and says he parked in a disabled space at the hospital, displaying his blue badge, before entering his registration details on the keypad in reception.

However, he received a fine through the post several days later. He appealed, but it was turned down and the fine has since gone up to £160.

Mr Winnington says he has no intention of paying the fine and will go to court to defend himself.

“They will have to get the money out of my back pocket. They won’t scare me.” Mr Winnington said the keypad system was confusing to use as letters and numbers can be mixed up.

He said: “The real bit of trickery is the use of lower case letters on the keypad, when registration plates are in upper case.”

Keypads in the hospital have since been replaced with larger versions which use capital letters.

A spokesman for NHS Property Services, which owns the hospital site, said: “We are taking up these issues with Smart Parking as a matter of urgency.”

Henley MP John Howell said he was aware that some constituents had received letters from solicitors.

He said: “It’s part of the reprehensible behaviour of Smart Parking in making these claims against vulnerable people.

“I would suggest they need to get on to NHS Property Services, who have promised to reverse these fines, as quickly as possible.”

Mr Howell has previously called for the company to be sacked.