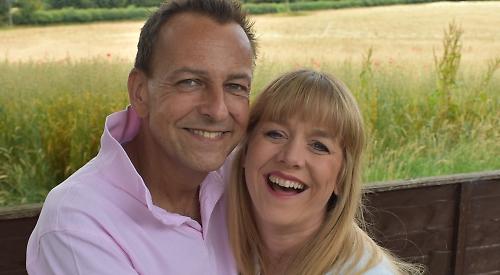 A FATHER fighting a rare form of cancer has seen it almost disappear from his body just two months after starting treatment.

He then learned it had spread to his bones, lung and liver and was given just a year to live.

However, he was denied treatment on the NHS because his tumour was in the “wrong” place, so his wife Lisa launched a £140,000 fund-raising appeal.

Since the couple’s story was first published in the Henley Standard in April money has poured in, enabling Mr Dipper to undergo pioneering treatment called immunotherapy, which helps the body’s immune system recognise and attack cancer cells.

And now he has been told that this has almost eradicated the disease.

Mrs Dipper, 37, said: “The cancer has now gone from the liver, from the lung and from four bones.

“I’m ecstatic. The death sentence has been lifted and Nick has been given his life back.

“He has been given a chance and he has got a chance to see his kids grow up.

“We were told he wouldn’t be here at Christmas so to ‘go on and make memories’. Now we’re looking at getting him into full remission.” Mr Dipper, a project manager, lives with his wife and their three-year-old twins Ely and Ezra in Highmoor.

He was diagnosed with nasopharyngeal carcinoma, where malignant cells form in the tissues of the upper part of the pharynx, last summer.

He began chemotherapy treatment immediately and then had radiotherapy as well.

The treatment caused severe side effects as it aggressively targeted the hard-to-reach tumour.

Mr Dipper lost the ability to swallow or speak and lost his hearing, taste and vision.

Then in December he suffered multiple organ failure. His kidneys were shutting down, which meant he was overdosing on morphine as his body could no longer process it, and one of his lungs collapsed.

He was transferred from the Royal Berkshire Hospital in Reading to critical care at the John Radcliffe Hospital in Oxford for specialist cardiothoracic surgery where two blood clots were removed from his right lung.

He spent six weeks in hospital and then had a week of recuperation at the Sue Ryder hospice in Nettlebed.

Mr Dipper appeared to be out of the woods when an MRI scan in January suggested that the cancer had gone. However, days later the couple learned that it had spread and there was nothing more the doctors could do.

Mrs Dipper then began looking into alternative treatments and was recommended immunotherapy by an oncologist friend.

She suggested the treatment to the consultant at their next meeting and was initially told her husband could have it.

However, the couple then discovered that in fact the NHS was only licensed to offer it up as far as the mouth and that they would have to go private instead.

Since then the family have raised £135,000, including more than £3,000 in cheques and cash from readers of the Henley Standard.

The money enabled Mr Dipper to have the treatment at the Royal Berkshire Hospital in Reading and in Germany.

Last week he had a full body scan at the John Radcliffe Hospital in Oxford to check his progress and the couple received the results on Monday.

Mrs Dipper said: “What we’re seeing is the cancer has halted. We had seven spots and six of those have gone.

“They had pretty much said to us ‘don’t expect to move mountains, don’t expect massive results from it’.”

She added: “Although we haven’t quite killed all the cancer yet we’re not doing so bad!”

Mr Dipper has begun to regain weight, muscle and stamina as his body has got used to the treatment, which he receives every fortnight. He also had a course of drugs in Germany and will have to return there every three months for a vaccine specifically made for him.

His next scan will be in September.

“I’m still angry at the fact that the NHS wouldn’t even give him a chance and he can’t improve any quicker than he is.

“There’s light at the end of the tunnel now.”

Hof’s wine bar and restaurant in Market Place, Henley, is hosting a fund-raiser on Wednesday from 7.30pm.

Guests will receive a three-course meal with two glasses of wine. There will be also be live music and an auction.

Mrs Dipper said: “If we drive that night forward we will smash that last £5,000.

“The support that people have given two people they have never met, or don’t even know, has been phenomenal.

“We have had nationwide support on this and it just restores your faith in humanity.

“Somebody very close to Nick donated £10,000 but mainly it has been done on fivers and tenners. It’s been unbelievable.”

You can donate by sending cheques or cash to the Henley Standard offices at 1 Station Road, Henley, RG9 1AD or online as follows: