Gupta's strike gets amber and blues back to winning ways 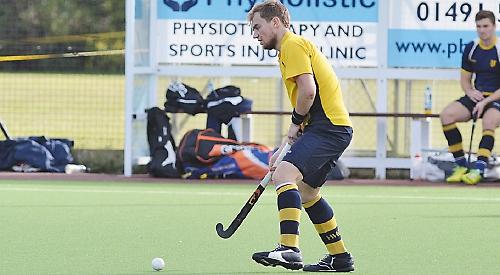 HENLEY got back to winning ways as they triumphed 4-3 away to Horsham last Saturday in their Premier Division 1 clash.

The home side started brightly and dominated the play for the first 10
minutes before taking the lead from a quick counter attack.

The visitors hit back with a succession of corners which saw man-of-the-match Luke Gupta score from two penalty corners to put the amber and blues 2-1 up at half-time.

The second half started with Horsham on the offensive, but a slick and fast counter attack by Henley saw Chris Green sprint clear into the D where he accelerated past his man and unleashed a backhand shot to put his side 3-1 up.

Soon after Hetherington picked up a yellow card before the home side pulled back two goals to level the scores following a series of penalty corners.

Henley hit back and good work by Joyce and Foster on the right-hand side after a series of long corners saw Foster carry well and cross for Gupta, who swept the ball into the goal.

Henley were able to control the remaining few minutes of the match to secure all three points.

HENLEY 2nds came from 2-0 down to secure a point in a 2-2 draw with South Berkshire 1sts.

Henley’s strong midfield were able to turn ball possession into pitch position and from his centre half location, Fred Newbold controlled the game firmly, linking nicely with Joe Ruggiero and Dan Herbert through the midfield.

The visitors played measured build-up hockey that tested the Henley back line in a half of few chances at either end. Henley’s best chance of the first half was ruled out after Hall with the goal at his mercy managed to find Harmer’s foot on the far post.

In the second half Henley tightened up on their passing in the final third and produced more outcomes as penalty corners and shots on goal were not in short supply but they brought out the best in the South Berkshire keeper.

Against the run of play, the visitors snatched a goal after finding a hole in the Henley defence of Blair, Clarke and Roberts.

The visitors went 2-0 up soon afterwards following a swift breakaway through the middle.

South Berkshire then changed tactics and tried to defend the lead, and in the process invited pressure on themselves.

Henley exposed gaps down the flanks and after good work on the right Hughes-Burne scored from the resulting penalty corner.

With five minutes remaining Newbold’s restart from a long corner on the left found captain Herbert who pealed into the D unchallenged and struck a low backhand shot into the far corner of the goal.