Drummond's fine saves not enough for amber and blues 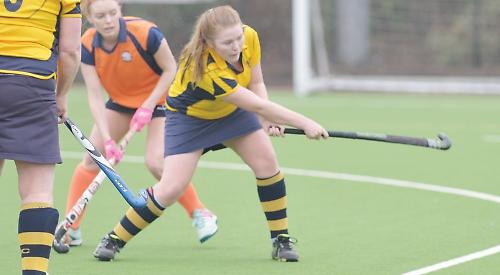 Going into the match Reading-based Phoenix and Ranelagh 3rds were third in the table having thrashed Henley Ladies 3rds 6-0 in their home fixture back in September.

Henley were determined to make life hard for their visitors and although Phoenix and Ranelagh 3rds were the better team and controlled the game on the day, the amber and blues fought and competed well.

Henley’s predominantly young team produced some fine cohesive passing moves in both halves of the match and refused to allow Phoenix and Ranelagh to over-run them.

However, the last 15 minutes of the first half proved to be Henley’s downfall as they lost discipline in defence which resulted in Phoenix and Ranelagh scoring three goals.

Throughout the rest of the match Henley’s ever-improving strength on the ball, team work and tenacity stood them in good stead as they frustrated their strong opposition.

Beccy Barry was named Henley’s player-of-the-match while Sarah Drummond pulled off a string of good saves in goal.