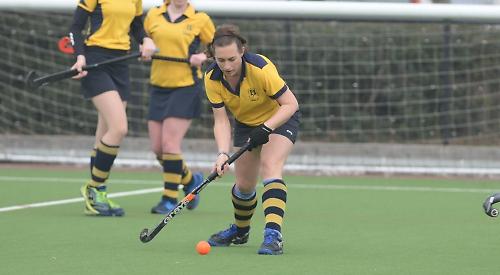 HENLEY Ladies 2nds made it three wins on the spin as they ended the first half of their league campaign with a 3-1 triumph at home to Maidenhead 3rds at Jubilee Park.

The amber and blues started strongly with passages of play down the wings to Sophie Rainbow and Sophy Rodgers and on to forwards Gracie Newbold and Taminah Brown.

It seemed like only a matter of time before Henley would score a goal but after a slow start from second-in-the-league Maidenhead, the visitors fought back hard but with good tackles put in by Becky Karver and Katie Knight the ball was distributed back into attack.

Henley won a number of short corners but failed to take their chances. Soon after an unexpected break from Maidenhead resulted in them winning a short corner. Sarah Drummond pulled off a good save but the a Maidenhead player found the back of the net from the rebound.

Henley hit back and were rewarded with another short corner where an injection from Karver to Rachel Herbert at the top of the D saw her fire home the equaliser with the ball going in via the keeper’s left hand side.

Henley started the second half hungry for more goals as they put the visitors under pressure for which they were rewarded by two strikes from Brown. Both goals came from open play slipped by midfielders to Brown, who was well positioned on the posts.