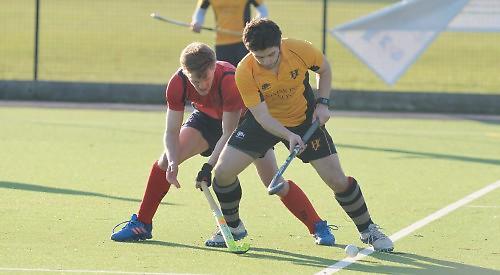 IN their first since the Christmas break last Saturday, Henley ran out narrow winners against county rivals Banbury at Jubilee Park.

Going into the match both sides were sitting on the same points around the potential relegation positions in the South Premier League.

Henley started the match strongly with the midfield four of Ralph, Joyce, Hetherington and Land setting a high tempo, which allowed the creative forward pairing of Foster and Harding to link up with striker Green on a regular basis in the first 15 minutes.

Despite the early pressure Henley were caught on the break as Banbury launched a slick passing move down the left wing, resulting in a neat far-post finish from Simon Boardman.

Despite the setback Henley looked confident on the ball as the half went on and equalised through captain Ed Foster whose diving effort rifled past the Banbury goalkeeper, following an astute through-ball from Sam Heaver.

With the scores level at half-time it was anyone’s game but Henley came out strongly after the break, resulting in them taking the lead on the 40-minute mark. After some determined play from Luke Gupta, Henley won a short corner, which was despatched into the net by Heaver.

Banbury threw men forwards for 10 minutes to try and force an equaliser. Henley stood firm though, with goalkeeper Rob Green making some fine saves to keep the away side at bay, supported by some good last-ditch defending by Rowe, Hughes-Burne, Walter and Slay. In the last 10 minutes Henley had several opportunities to increase their lead but were unable to take them leading to a nervy finish. However, the home side remained calm in the final minutes and saw out the match to secure the important three points.