England wraps up scoring to down league leaders PHC Chiswick 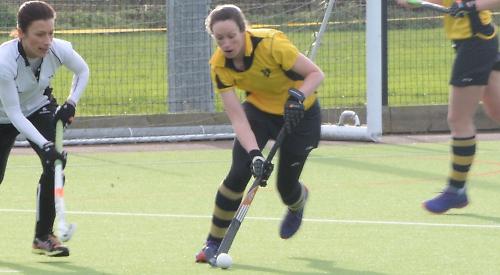 The amber and blues dominated the match and from the first whistle, forward thinking and fast paced captain Georgie Metcalfe surprised the defence of Chiswick by driving the right channel and creating an opening for Charlotte Cockerton to fire the ball home from close range after just 30 seconds.

Chiswick fought hard to level the score but Henley were creating opportunities across the park. Good interlocking play by Louisa England and Jemma Barham allowed the hosts to push forward to try and increase their lead. However, Chiswick were able to counter attack and exploit exposed areas to claw a goal back against the run of play.

Henley needed to keep their heads and remain vigilant of Chiswick’s ability to turn the ball over and utilise their key players to make a difference. The home team regrouped and focused on identifying attacking threats and controlled the game accordingly.

Good substitutions by head coach Jenny Buckingham- Hedges bought on the fresh legs of Meg Moran who was able to break quickly. Metcalfe, again influential in the final third, distributed the ball to Moran who was left open to lift the ball over the keeper and into the back of the net.

The second half was fiercely competitive but it was the home side that kept their composure. Kat Green frustrated the left attacking side making decisive tackles and distributing the ball up the pitch. Billy Moore made inroads upfront to hold up play and create opportunities for Henley to get ahead.

With five minutes of the match remaining Henley gained a short corner. A disguise pass by Green sent the ball to the far right post leaving Louisa England to poach the ball in the back of the net to make it 3-1.