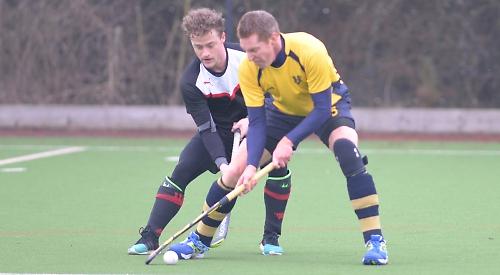 Milton Keynes took the lead after just two minutes following a sloppy start from the visitors.

Following this the away side started playing some flowing attacking hockey and equalised through Luke Gupta, after Ed Foster won a short corner.

Five minutes later Henley took their lead through Alex Land’s first league goal for the club. Land’s powerful first shot was saved by the goalkeeper, but no mistake was made with the rebound, as he tucked the ball into the bottom corner.

In the second half Milton Keynes stepped up the pace, and threw four high forwards up the pitch to stretch the tiring away side. This resulted in two well-taken goals, with Henley on the back foot still with 10 minutes remaining.

Only one goal behind, Henley tried to push forward, but the fatigued squad were dealt a hammer-blow, when Milton Keynes sealed the three points with five minutes to go after a breakaway goal.

HOSTS Henley 2nds ran out comfortable winners on a cold snowy afternoon at Jubilee Park on Saturday against basement side West Hampstead 3rds to extend their unbeaten run to seven matches.

The game started briskly with Henley dominating possession and leading the early running. A short corner was won and slotted into the bottom corner with a crisp strike from Jody Measures from the top of the D.

The hope that this early strike would settle the home side and lead to a dominant performance soon began to dissipate as, despite having the bulk of possession, Henley struggled to stretch their lead.

With the first half coming to a close Richard Woolfrey found the back of the net with a crisp finish after the ball broke free to him in the D.

West Hampstead quickly replied with a goal of their own, taking advantage of a Henley turn-over and dispatching well against a defence caught on the back foot.

The second half proved to be a disjointed affair with both sides giving away possession easily.

Henley toiled away and two more goals were added by Woolfrey and Guy Harmer, with a notable assist from second team debutant Tim Barrass, who made a late but solid contribution to the match.

Expecting a comfortable victory against a side who are close to bottom of the table, Henley started with confidence and quickly established dominance with some slick passing across the pitch.

Bicester packed their defensive line to thwart the visitors’ attacking play, resorting to attacking on the break, and so proved difficult for Henley to break down.

The visitors opened the scoring when midfielder James Baker threaded a clever pass to Matthew Herbert. Herbert then crashed the ball to father Julian in the Bicester area, whose sharp finish took a deflection from a defender’s stick leaving the goalkeeper with no chance.

Following the interval and against the run of play, Bicester scored a goal from a fast break, with a powerful reverse stick finish. The equaliser shook Henley and gave the home side confidence to attack, Bicester creating a number of chances which were thwarted by Ed Newbold who had a good match as stand-in goalkeeper.

Regaining composure and some of their first half fluidity, Henley won a series of penalty corners. One led to a goal when Austin slipped the ball to John-Joe Cottam who found Harry Wray at the far post to regain the lead.

Nerves were calmed further as the lead was extended to 3-1 following a good move across the pitch through Draycott, Bodeker, Julian Herbert and Matthew Herbert. The final ball found Cottam unmarked, who finished emphatically.

In the final minutes several unconverted chances followed for the visitors who secured all three points.