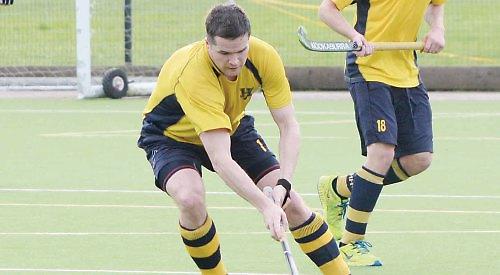 A LAST-MINUTE equaliser gave Henley a share of the spoils at home to Bromley and Beckenham last Saturday as the amber and blues fought back from 3-0 in the closing stages of the match to salvage a point.

Going into the match at Jubilee Park visitors Bromley and Beckenham, who were relegated from the national league last season, topped the league table.

The match started at a frantic tempo as both sides looked to build momentum. With much of the first half competed in midfield, clear goal-scoring opportunities were few and far between.

Luke Gupta went close for Henley after 20 minutes following a determined solo run down the left wing which resulted in a smart save from the Bromley goalkeeper.

Moments later Bromley had a goal disallowed for dangerous play after a broken-down short corner routine ended up with a high, miss-hit shot striking the body of captain Ed Foster. The score remained goalless at half-time.

The second half started much like the first, with contested ball in midfield and chances fairly minimal. Bromley broke the deadlock from a penalty stroke after Foster was struck in the faceguard on the Henley goal line following a short corner deflection, the resulting penalty flick nestling in the top corner past Roy Cox in goal.

Bromley doubled their lead moments later with a neat move down the right wing and a first time finish. Much to the home side’s dismay, the league leaders added a third with eight minutes left to play as a powerful strike rebounded off Cox’s chest and into the path of a Bromley striker, who had the simplest of tap-ins from one yard out.

With nothing to lose Henley threw men forward as they looked for what seemed an unlikely point. Their cavalier approach was rewarded immediately after a short corner drag flick from Foster nestled into the corner of the Bromley goal.

Two minutes later Henley pulled back another goal, this time through Sam Heaver after Foster’s drag flick was only half-stopped by the Bromley keeper.

At 3-2 Henley continued to throw caution to the wind in the hunt for an equaliser. With two minutes left on the clock, Tom Walter stole the ball off the away side defence and found Steve Harding in the Bromley D. His cross found Chris Green whose first touch took him around the goalkeeper. With an empty net beckoning, the marksman was then cynically fouled by a recovering defender, the umpires having no option but to award a penalty stroke to Henley.

Up stepped Rhys Joyce who slotted the ball past the Bromley and Beckenham goalkeeper to earn his side a share of the spoils.

HENLEY 2nds crashed to a 5-2 defeat away to fellow promoted side Newbury.

The game started brightly but the tone was set early on with a mistake at the back by Herbert that allowed Newbury’s top scorer to unleash a shot from the right of the D that whistled past the Henley goal.

Further pressure by the home side ensured that Henley failed to find any rhythm, consistently surrendering possession in dangerous areas. Bowyer in the Henley goal was called on a number of times to rescue his side and keep them in the game.

Newbury’s tails were now up, and sensing an opportunity to put the game to bed they pressed again and were rewarded with another before half-time.

The second half was a more even affair as Henley managed to gain some competitive spirit during the break and, most crucially, some structure to their play. Despite this improvement the next goal went to Newbury after the Henley defence was unlocked and the ensuing short corner was converted.

Following the restart, another mistake by Herbert yielded the ball to the Newbury centre forward who was able to slip the ball past the exposed Bowyer. This appeared to spark some life into the Henley side who found joy at the other end with a short corner of their own, edged in by Woolfrey. Their second followed soon after some good work down the right by Hall and Harmer, with Newbold slotting home on the left post.