Visitors have no answer as amber and blues march on 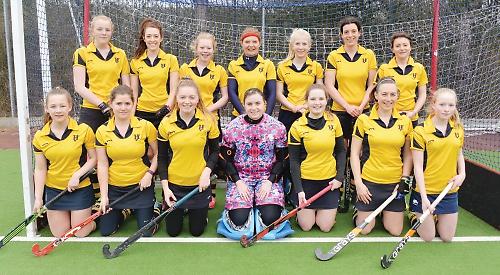 VISITING side West Hampstead scored two second-half goals to earn a share of the spoils at Jubilee Park last Saturday.

The home side started brightly, passing the ball across the pitch through fullback Joyce. Attacking power from player-of-the-match Georgie Metcalfe, who carried the ball at pace into the Hampstead circle, was rewarded with a penalty corner, skilfully finding a defender’s foot. The strike from Kat Green rebounded from the keeper which was confidently slotted into the Hampstead net by Louisa England, putting the home side ahead.

Despite having the majority of possession, a skilful Hampstead forward was able to penetrate the Henley defence, calling upon keeper Hannah Lavis to step out and make a sliding save, maintaining the narrow lead.

Creative play up the left from Sophie Hoskins and Ellie Roseff was defended well by the visitors but Henley were able to penetrate the circle again and upgraded to a further penalty corner. The routine was executed well, Green’s disguised pass went to England who deflected the ball into the Hampstead goal as Henley went into half-time with a two-goal advantage.

Henley continued to work the ball forward in the second half, with centre midfielder Jemma Barham finding herself inside the Hampstead circle. Barham picked up a pass from Charlotte Cockerton but was unable to convert.

A 10-minute spell in the second half saw Hampstead apply pressure to the home side, achieving a penalty corner which was initially saved by defender Rachel Herbert before hitting her foot on the line. The umpire awarded a penalty flick which was sent high into the Henley goal past keeper Lavis’s outstretched arm.

Hampstead won a second penalty corner with five minutes remaining which was converted from the top of the circle. Despite their best efforts, Henley were unable to reclaim the lead.

HENLEY Ladies 2nds made it 10 matches unbeaten as they maintained their promotion push with a comfortable home win against local rivals Reading 3rds.

Henley dominated play from the start, showing confidence and skill on the ball. There was good use of the width of the pitch, with passes sent wide to left and right backs, Meg Parker and Karen Walker, for transfers up the line to the midfielders.

Right midfielder Sophie Rainbow used her pace to produce a good baseline run and as she entered the circle she slipped the ball to Rachel Herbert on the penalty spot who slammed it into the back of the goal.

Soon after the ball was transferred out to Walker on the left, who sent a line ball up to captain Sophy Rogers who crossed to Rainbow in the D for a calm and collected tap-in to make it 2-0.

Reading mounted a strong attack down the right and were rewarded with a rare short corner. Despite their best attempt at deflecting the ball into the goal, Herbert was on the line behind the keeper and volleyed the ball that was going top right, away to safety.

This gave Henley a wake-up call and with no time spared, the ball was back up in Henley’s attacking quarter. Herbert received the ball in the D and looked to Sarah Drummond for a deflection on post, making it 3-0 to Henley going into half-time.

Henley continued to dominate play throughout the second half with Anna Wray and Emma England linking passes from the centre to the wings.

The final goal of the game came from Taminah Brown with a slip past the keeper.