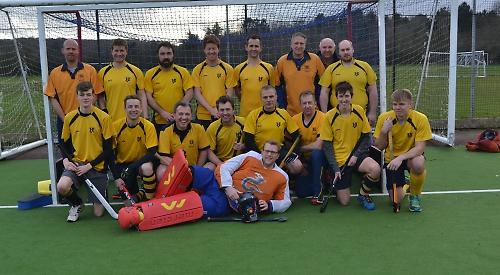 MISSING seven regular players Henley conceded the same number in goals at home to Oxford Hawks last Saturday in what was their second league defeat on the spin.

Alex Land provided the only moment of note for the Amber and Blues by registering a consolation goal.

WITH resources stretched to the limit across the men’s section this week, it was an opportunity for some new and returning players to prove their worth.

Phoenix have been one place above Henley in the league for a while, so this game provided sufficient interest for both sides to make a decent spectacle.

The hosts started the brighter of the two, with their front men pushing high and taking the game to the visitors, although early opportunities were thwarted by Bowyer in the Henley goal or squandered by the Phoenix forwards.

The first goal came on 15 minutes following a penalty corner which was pushed hard and low into the bottom right of the Henley net.

Further pressure was then applied as Phoenix sensed blood but the tables were turned when James Rechner and Geoff Joseph, on his return to the UK, combined down the Henley right with the latter picking out Harry Wray on debut who arrived in front of goal to sweep home.

This seemed to give the away side the confidence to play a much more attacking style of hockey and push further into the Phoenix half, and this is where Henley played most of the rest of the game.

Despite the territorial advantage, Henley were still vulnerable to the counter-attack and this proved to be their undoing as Phoenix exploited the lack of cover, scoring at the back post after some good work down the right.

Henley continued to press high, although they seemed to lack the ideas or creativity in the final third of the pitch.

Parity was restored by Warrender who struck a low backhand from the top right of the D after he was picked out from a quick free hit.

Phoenix persisted with their attack-on-the-break tactic and, again, despite being pinned back in their half, managed to steal the game in the last 10 minutes following a mistake at the back by the Henley defence.

BEFORE this clash, Henley had a two-point cushion at the top of MBBO Division 4, ahead of Oxford.

The table perhaps flattered to deceive as Oxford, unbeaten in their 14 games, had played four fewer than Henley, through a combination of weather-affected home games and the ineptitude of the two university sides in the league.

None-the-less, both sides were keen to stake their claim to the title so a hard fought encounter was expected and delivered.

The Henley side, without skipper Rowan Austin, top-scorer James Baker, ex-retiree Mike Woolfrey, Tim Barrass or Leo Packham, had something of a scratch look and feel and had to call on the services of players whose hockey was untested for several months.

Oxford’s style is to defend deep and charge forward and in the first few minutes, the approach had produced some exhilarating counter attacking hockey, putting stand-in centre back Matt Herbert and keeper Ed Earls under immense pressure.

Henley were not without an attacking threat and after a good period of possession won a short corner in the 13th minute, Tim Herbert finishing off a slick passing interchange with Cottam, with some keen individual skills. The corner came to nothing, but allowed the Oxford keeper to rebound the ball wide and high up the pitch. The move was completed with a cross from the right side of the D, which was tapped in at the far post by Wynd.

The jitters set in a little and Henley played nervously and without much attacking threat for the second quarter of the match. Only some fine shot-stopping from Earls held the scoreline going into half-time.

After the re-start, Henley’s early attacking patience and composure continued to elude them and it was only a matter of time before they conceded a second goal.

After pressing high on a Henley 16-yard hit, a loose pass out of defence found Conlon whose threaded pass to Tasker was smacked past the outstretched Henley keeper.

Perhaps high on over-confidence, Oxford began to sit back and invite some Henley pressure. Sensing the moment, Henley fought their way back.

Dogged defending from Bodeker turned the ball over in Henley’s favour around the 50th minute and a series of fast passes down the Henley right flank involving Draycott, veteran right back Ian Heggie, Phillips and Herbert ended with a smart turn and finish from Phillips two yards out from goal. So Henley now had the classic dilemma of wanting to find a way back into the game but aware that throwing men forward could expose them to Oxford’s counter-attacking threat. The ploy worked to an extent and Henley won four penalty corners in quick succession, producing one decent save from the Oxford keeper but also ending Foster-Yeow’s first game in three months with cramp so severe it took him an age to leave the field.

With Henley tiring and increasingly fraught, Oxford were able to produce another quick counter and secure three points with five minutes left on the clock.

HENLEY came into this game on a run of 10 consecutive wins that has resulted in them looking strong candidates for promotion.

Sitting second in the league and now in a round robin set of fixtures with the other top five teams, every game has become a “six-pointer” and with local rivals Phoenix & Ranelagh sitting in third place some eight points behind, a win was, for Phoenix, a necessity.

The first half was played out at a frenetic rate with the majority of play in the Phoenix half but with little goal action and neither team able to break the deadlock.

Henley came closest to scoring when a good through ball from Simon Taylor found Ewan Watkins on the penalty spot who just failed in his effort to deflect the ball around the on-rushing keeper.

The second half began in torrential rain which adversely affected the quality and pace of the game as both teams struggled to get to grips with the conditions.

Henley were still on the front foot with Richard Nicholson and Rupert Wiseman in particular showing strongly with attacking half back play and putting Phoenix & Ranelagh under continued pressure.

Following a concerted phase of attacks from Henley down their right wing, the ball was quickly recycled and spread across to the left from where Piers Edgell injected accurately to Tim Cima who beat the keeper and nudged the ball into the path of Wiseman to slot the ball home for a deserved lead for the home side.

Phoenix & Ranelagh countered by throwing more players forward and making Henley drop deeper and deeper into defence. With Adam Warner and Simon Ward excelling in the middle of defence it seemed Henley would hold firm. However with 10 minutes to go Phoenix & Ranelagh forced a series of short corners, with one resulting in a strong shot just being cleared off the line by a Henley defender. The onslaught continued and despite numerous appeals from the Henley team for a foul a goal was awarded form another short corner to level the scores.

Rather than sit back and settle for the draw the Henley skipper threw caution to the wind and replaced a defender for an extra attacker.

With minutes left this bold move seemed to have paid off when Watkins broke free down the left and crossed in to the Phoenix & Ranelagh D where Cima collected the ball in front of goal but agonisingly saw it spin from his control. Phoenix & Ranelagh, with a huge sigh of relief, managed to scramble the ball away and the umpire blew for full-time.

A draw keeps Henley on target for promotion, with a key game at home next week to top of the table Slough next in their sights.