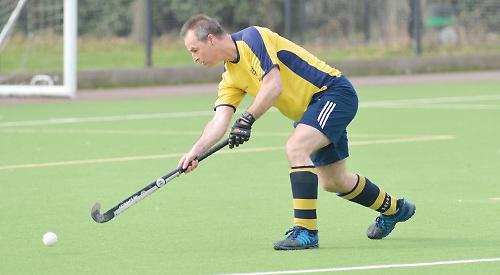 HENLEY 1sts returned from their last away match of the season at Battersea Park empty handed last Saturday despite dominating large parts of the match.

The first half saw Henley playing some flowing attacking hockey but the Wayfarers’ goalkeeper made some good saves to keep the away side at bay.

After 20 minutes, with their first meaningful attack, Alex Penney scored a well-taken short corner drag flick, high past Rhys Joyce on the post.

In the second half Henley dominated the possession and territory stats but were unable to beat the Wayfarers’ keeper, who made a good save from Chris Green, after deflecting his close-range effort over the bar.

Despite dominating proceedings Henley went 2-0 down after a long aerial ball found a Wayfarers’ striker in the D, who converted the chance past Cox, with a neat finish.

With five minutes left to play Henley substituted Cox in goal for an additional outfield player in order to try and force two late goals. However, this resulted in another breakaway goal for the home side.

HENLEY 2nds got back to winning ways at Jubilee Park on Saturday despite playing the match with the bare 11 players.

The game started brightly with both teams testing each other out early on but it was the visitors who found the net after a fumbled clearance by Henley was tucked away.

This sowed some confusion into Henley ranks as they struggled to string more than a couple of decent passes together anywhere on the field and which in turn galvanised Ashford into producing their best spell of the game. If the visitors had managed to covert that superiority into more goals it might have been too much for Henley to come back from.

The hosts equalised in the second half from a penalty stroke by Woolfrey after an Ashford player prevented a goal-scoring opportunity with his body. Further dissent by Ashford found them with a player in the sin-bin and Henley turned this numerical advantage into another goal – Joseph down the right picked out Woolfrey at the top of the D who tucked the ball under the advancing keeper.

Henley were 2-1 up and in control but the upper hand was surrendered following another defensive lapse which saw Pollard sweep the ball into his own net.

The final five minutes were then set up for a final flourish, which Henley duly provided. Centre midfielder George Warrender made a snaking dribble left across the Ashford D ending up on the right byline. Under heavy pressure he fired the ball to the penalty spot where Harmer was on hand to smash the ball home.

HENLEY 3rds kept their promotion push on track as they secured a share of the spoils at Brent Cross against West Hampstead 5th team in a tense encounter.

Going into the game the visitors knew that with just three matches remaining in the league, West Hampstead represented a potential banana skin in the quest for promotion. In their own battle against relegation, the London side have been rejuvenated and have taken points from other promotion contenders, notably Amersham and Chalfont 2nds and Oxford 4ths.

The game started at a brisk pace with both teams pressing high and stretching the game across the pitch. The high press restricted opportunities for Henley to pass around the back but the visitors adjusted their style quickly. A more direct style of play gave ample opportunity to attack up both flanks with defenders Ian Heggie and Mike Woolfrey acting as the launchpad for Henley’s attacking moves.

West Hampstead were intent on driving forward powerfully and although Henley’s tight defensive unit soaked up most of the pressure ably, a speculative loose ball across the Henley area somehow ended up in the net, the home side scoring against the run of play. Henley did not panic and continued to play an aggressive style of hockey. Tim Barrass and Tim Herbert looked dangerous up front making intelligent leads and Harry Wray looked unstoppable as he marauded across the pitch while Matthew Herbert continually challenged the defence.

In spite of the pressure Henley were unable to convert in the final third of the pitch with several chances going begging. Ian Rechner was unlucky not to score as the goalkeeper pulled off an impressive reaction save from a sharp slapped shot.

Continuing after the interval in the same style, Henley managed to break through with a well taken goal from Rechner, following good interplay between Heggie, Wray and Matthew Herbert.

West Hampstead struck back soon after and with a 2-1 lead opted to play more men behind the game line in a much more defensive style.

Henley threw men forward, creating many chances and penalty corners which went unconverted. With just seven minutes to go, captain Austin sent the goalkeeper to the substitutes’ bench, bringing Rechner back to field 11 outfield players in a final desperate push for the equaliser.

On the very stroke of the final whistle, Cottam robbed a defender from a 16-yard hit, and drove powerfully into the area to win a penalty corner.

Knowing that this was the very last chance, Henley posted 11 attackers for the penalty corner. Baker’s shot was parried, as was Herbert’s effort on the rebound, but the second rebound fell to Rechner who swept powerfully into the goal for the equaliser.