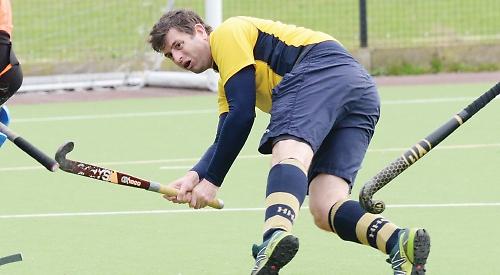 HENLEY 1sts lost their penultimate match of the season at Jubilee Park last Saturday when they went down 4-1 to mid-table Spencer.

The result leaves the amber and blues in one of the potential relegation places in the South League Premier Division 1 table. The number of sides to be relegated depends on how many sides are relegated from the national league.

With nothing left to play for this season Henley expected Spencer to play some attacking hockey, which would have suited the hosts’ counter-attacking style. However, Spencer’s defensive tactics proved to be effective and the home side struggled for large periods of the match.

For the first 15 minutes Henley were by far the better side. On 10 minutes they took the lead after Steve Harding latched on to a loose ball in the Spencer D, then calmly lifted the ball over the on-rushing Spencer goalkeeper with a reverse stick half volley.

Henley’s lead lasted just five minutes as a breakaway goal and deflection found its way past Roy Cox in goal.

The away side dominated the second half by playing a controlled half-court press. This resulted in Spencer scoring three more break-away goals as Henley struggled to play against the defensive set-up. Chances for the home side were few and far between for the remainder of the match and Spencer ended up 4-1 winners.

HENLEY 3rds took another crucial step towards promotion with a commanding victory over Reading 3rds, with a good performance from the visiting goalkeeper preventing a wider margin of victory.

Henley soon settled into quick passing and their attacking style of hockey. Matthew Herbert at left back and Ian Heggie at right back both distributed the ball at pace up the flanks, and the midfield of James Baker, Jack Draycott, John-Joe Cottam and Leo Packham stifled Reading’s offensive play and set up Henley’s attacking moves.

With mounting pressure, Julian Herbert opened the scoring after good work in the Reading area by Timothy Herbert. Draycott added another soon after from a penalty corner, picking up a rebound and depositing the ball in the roof of the net. Baker took the score to 3-0 from Henley’s dangerous penalty corner routine, again seizing on a rebound.

Reading drew a goal back following a rare defensive error but Draycott then scored his second with an individual goal, keeping two defenders at bay as he entered the Reading area before releasing a sharp shot to find the bottom corner of the goal with precision.

With a 4-1 lead at half time, Henley looked reasonably comfortable although with the frenetic pace difficult to sustain, Reading were always in with a chance of scoring.

Reading snatched another goal back to take the score to 4-2, but James Rechner extended the lead to 5-2 following a fine move. Cottam charged down the Reading right back to steal the ball, leading to a quick transfer through Baker, Heggie and Ian Rechner, finally finding James Rechner who finished neatly.

Julian Herbert capped off a fine performance with a goal following a piercing move down the right hand side. Heggie’s long pass found James Rechner who set up Timothy Herbert, whose shot was well saved by the Reading goalkeeper. Julian Herbert picked up the rebound and unleashed a shot from a narrow angle. Reading added another in the dying minutes.

HENLEY 4ths secured promotion with a slightly less than convincing win over local rivals Sonning, and in doing so positioned themselves well for finishing champions with one match remaining.

Henley, fielding five changes from the previous week, started with high intensity and had Sonning on the back foot with strong attacking moves down the flanks exposing potential weaknesses in the Sonning ranks.

Despite numerous openings the Henley attack failed to find the goal. In defence the visitors were not troubled with their keeper not being called upon to make a save.

With the first half coming to a close a hopeful ball from Sonning was picked off deep in the Henley half by Neil Emmett who
quickly recycled it down the left flank to Jules Aplin who set about a mazy run into the Sonning D, beating three defenders before losing control on the penalty spot
where Tim Cima stepped in to fire home.

From the restart Cima stole the ball from the Sonning centre back and following a slick sequence of passing the ball fell to Andy Green who shot strongly across the keeper to make it 2-0.

The second half began at a frenetic pace with Henley wasteful in possession and affording Sonning a sliver of hope. However, Sonning couldn’t test the keeper with
Simon Ward and Adam Warner both looking particularly strong in defence.

With time ticking away Sonning did manage to force their way into the Henley D and with the centre forward seemingly about to lose control he was bundled over by Emmet leading to the award of a penalty flick. The flick was successfully converted with 10 minutes of play remaining. Henley hit back from a series of short corners the third of which was dispatched coolly by Green with a drag flick into the roof of the net.

Henley now sit top of the table and promoted, with a healthy goal advantage over second placed Slough.