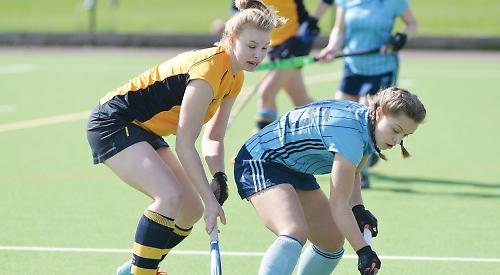 From the whistle, Henley were determined to get ahead of Reading with periods of attacking play. But the visitors were quick to identify Henley’s patterns of play and began to intercept balls, causing all Henley players to quickly retreat and defend.

Goalkeeper Hannah Lavis was in fine form, having to make a string of diving saves and venturing out from the goal to take on the Reading attackers.

Henley’s well-rehearsed defensive short corner routine repeatedly kept the ball out of the net, including a fantastic save on the goalline by Jemma Barham, which resulted in a broken finger.

Following an upbeat and passionate half-time talk by coach Jenny Buckham-Hedges, Henley Ladies went back on to the pitch full of grit and determination.

Unfortunately, Reading must have had a similar talking to and attacked with powerful quick runs, catching Henley off-guard and off-pace, and scoring two goals in quick succession.

However, Henley are not a team to give up easily. Careful play by midfielders Meg Moran and Jemma Barham brought Henley back under control, transferring the ball across the pitch and taking care of possession. This game was far from over.

Strong runs by forwards Louisa England, Emma Buckham-Hedges, Charlotte Cockerton and Billie Moore got the ball moving up the pitch and into Reading’s defensive line.

With five minutes to go and with Henley full of confidence and belief, they kept attacking against Reading’s tiring defence, with Billie Moore showing incredible stick skills to win yet another short corner.

The corner’s shot was rebounded by the Reading goalkeeper on to Moore’s stick, who carefully slotted the ball into the back of the goal to equalise with three minutes to go.

As soon as play reset, a lapse in Reading’s concentration resulted in the ball being turned over to Henley’s advantage, who threw all their energy and gusto into moving the ball forward into Reading’s D and winning yet another short corner and another cleverly worked routine finished by Cockerton put Henley into the lead.

The clock ran down leaving a shocked Reading in disbelief. An incredible and well deserved win for the team, which moved Henley above Reading in the league table to sixth place.

HENLEY travelled away to Maidenhead, who sat third in the table on 42 points, compared to Henley who sat in second on 44, in a winner-takes-all clash.

Both sides began nervously but Henley soon got into their stride. Some great passing down the right hand side of the pitch saw Henley win a succession of short corners. Unable to convert the hosts went in front, hitting Henley on the break.

But the amber and blues responded when a free hit outside their attacking circle saw midfielder Rachel Herbert dribble the ball five yards before slotting it through a gap to captain Sophy Rogers, who wrong-footed the keeper to bring the scores level.

In the second half, Henley saw a lot of the play. They again won short corners and it was from one of these that they went ahead. The ball came out to Karen Walker on the left, whose shot to the far post was touched in by approaching forward Charlie Rogers.

But Maidenhead were not finished and also went on the attack winning short corners. A number of these were either blocked by defenders Becky Karver and Anna Wray or cleared by keeper Emily Channon. Maidenhead then got a lucky touch and managed to level at 2-2.

A draw would have been enough for Henley but they continued to attack. Again the ball was brought forward on a surging run by the midfield. Holly Verran, out on the right, found Herbert in the centre who, after beating a couple of players, managed to find striker Taminah Brown unmarked in the circle.

In a fitting end to a campaign that has seen Brown win the club’s youth player of the season award, she slotted the ball home to seal the victory giving Henley promotion back to the Trysports Premier Division the season after relegation. A fantastic turn around helped by a 15-game unbeaten run.