Woolfrey and Packham on target as Henley 3rds secure promotion 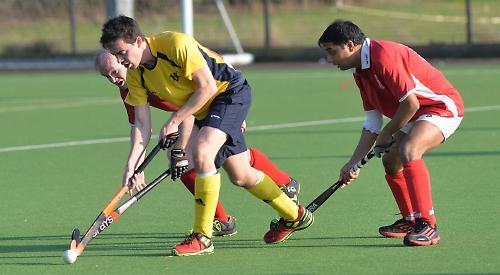 HENLEY 2nds crashed to a 4-1 defeat in their final match of the season at Jubilee Park last Saturday against champions Witney.

The match, a rearranged one that was postponed after Christmas due to a frozen pitch, had no outcome on final league places with Henley having already secured sixth spot.

Witney were much the stronger of the two sides and were aiming to round the season off in style while Henley’s objective was to disrupt and spoil the party. This they managed to pull off for a large proportion of the match.

Ed Hughes-Burne was a menace in midfield, debutant Richard Nicholson was solid on the left while young Will Beaumont provided pace and skill up front.

The first half finished goalless with Henley having had their fair share of chances. In the second half a swift clearance by Herbert found Woolfrey in midfield who in turn found Pollard in the D in space to slot the ball past the goalkeeper to open the scoring.

The lead was short lived as an error at the back by centre back Clarke allowed Witney to draw level, and their second came not long after from a penalty corner.

Henley continued to frustrate their opposition though their resolve was eroded by failing to make tackles at the crucial times which allowed another goal from open play and a final one from a penalty corner.

Knowing that Oxford 4ths would be almost certain to finish at the top of the league, this left Amersham and Chalfont 2nds and Henley 3rds fighting for second position and promotion.

If both sides won their matches each would end level on 50 points and the league position would be determined by goal difference.

Henley started the day with a goal difference advantage of six thanks to some heavy goalscoring earlier in the season. Though overhauling this seemed unlikely, Amersham have scored 26 goals in the last four games and have closed the gap alarmingly. If Amersham were to win by eight clear goals, this would put Henley under serious pressure.

Playing before Henley in the morning against Eastcote, Amersham were 4-0 up after 20 minutes, and looked as if they would score many more as the visitors started to tire. However, a good performance by the Eastcote goalkeeper kept them at bay and along with many missed opportunities, Amersham finally won 6-0.

With this result, Henley travelled to Aylesbury knowing that they needed just a victory from their afternoon fixture, which would automatically maintain a superior goal difference.

Although Aylesbury were bottom of the league, this was not expected to be simple given the home side have fought hard in recent weeks, achieving some impressive results including a draw against the league champions.

Henley started with aggression and drive, distributing the ball sharply across the pitch. Matthew Herbert looked dangerous on the right wing while Timothy Herbert proved to be hard for the Aylesbury defence to handle, traversing the pitch repeatedly to intercept balls played down the flanks.

Tension and frustration started to show as Henley started to make some reckless tackles in the battle to regain possession and drive forward. The visitors then lost pivotal midfielder Julian Herbert to injury but from the resulting short corner Woolfrey stepped up and his strike found the corner of the goal.

Showing more composure after the interval, Henley continued to dominate possession. With 15 minutes remaining, Leo Packham enabled Henley to relax, scoring the second with a neat finish on the reverse side following a driving move on the right.

It was fitting that promotion comes down to goal difference, given Henley have played an ambitious and creative style of hockey, scoring 84 goals in total.