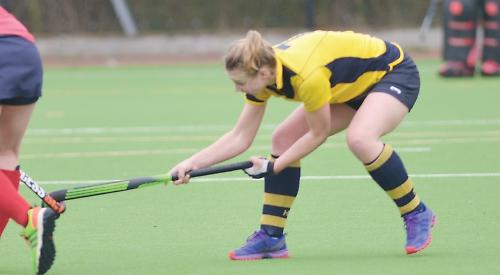 HENLEY goalkeeper Hannah Lavis pulled off a good last minute save to ensure her side earned a share of the spoils away at league leaders Marlow on Saturday.

It was to be a game of two halves as Henley started strong with several entries into Marlow’s D from driving runs by forwards Sophie Hoskins, Emma Walker and Taminah Brown.

Midfielders Mel Joyce, Jemma Barham, Georgie Metcalfe and Lou England ably fed balls through and won several short corners. Despite the pressure, Henley were unable to convert their chances as the sides were level at 0-0 at half-time.

Marlow came out strong in the second half with Henley a little slow to find their rhythm, which Marlow capitalised on finding the back of the net first.

Despite this setback Henley’s defence of Kat Green, Rachel Herbert and Chloe Nelson rallied and held off further strong attacks from Marlow, with some well timed tackles from Charlotte Cockerton, Ellie Roseff and Kath Draycott, stopping any forward motion and turning defence into attack. One of these moves led the ball to be worked up the right hand side of the pitch with skilful play between Nelson and Roseff who accurately fed the ball forwards to captain Metcalfe, who drove down the right, slipping it inside past the Marlow defender to find Hoskins who fired home.

This led to the hosts increasing the attacking pressure and in the last few moments, a Marlow player drove into the circle and shot high and hard at goal but player-of-the-match Lavis was able to get a hand to it and push the ball wide in a dramatic end to the game.