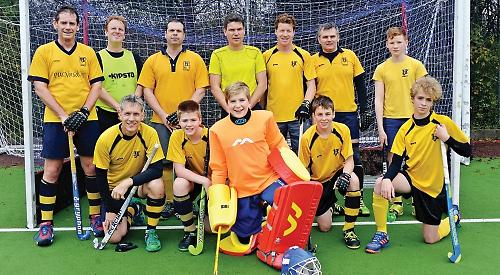 HOSTS Henley had no answer to visitors Oxford Hawks as they went down to a 4-0 defeat at Jubilee Park last Saturday.

Henley started the stronger and earned a short corner in the first five minutes. Good link-up play between Joseph, Foster and Green enabled them to find a foot in the Hawks D. A well worked routine was initially saved by the Hawks keeper with the ball ricocheting to Joyce a metre out who could only fire it into the keeper to keep the game scoreless.

Henley were having much of the possession but the Hawks’ defence was solid and Henley were struggling to convert any half chances. Hawks’ only reprieve was on the counter attack as the midfield of Joyce, Taylor, Steve and Walter were snuffing out any real openings.

Against the run of play Hawks scored the opening goal of the game — a short corner dispatched into the bottom left hand corner of the goal. The rest of the half played out with no further clear cut chances.

The second half continued much like the first, Henley having the lion’s share of possession but being unable to break through the Hawks defence. The final killer pass always eluded the front three of Joseph, Green and Zlatan.

Hawks were relying on breakaway attacks and 60 yard aerial balls to get into the Henley half with man-of-the-match Mortimer having to pull off a number of last ditch tackles to stop the Hawks forwards getting in on goal.

With Hawks still winning 1-0 with five minutes to go and Henley struggling to break through the Hawks defence, interim coach Heggie decided to take goalkeeper Cox off and put on a kicking back with the hope that the extra player would finally enable Henley to get a goal. Unfortunately this backfired.

With Henley pushing more and more men forward in the hope of finding the equaliser, they were left very thin at the back. With no goalkeeper, Hawks were able to score three quickfire goals into an empty net to leave the final score at 4-0.

HENLEY 4ths, with an average age of 42, drew in a derby match at Sonning Lane in their MBBO Division 8 West clash against a youthful Reading 7ths side who fielded five players under 18.

The first quarter was difficult for Henley with Reading controlling the game and the only respite affording the visitors being the odd foray into the opposition half, which were quickly closed down by the home defence. Persistence paid off and following the winning of a long corner the ball was distributed around the opposition D and fed through to James Moore who beat two players and calmly slotted home. The remainder of the half was played out with Henley now having much more of the play.

The second half started much as the first did with Reading again in the ascendancy, fine defending from Ed Newbold and Simon Ward supported ably in midfield by the composure and distribution of Richard Nicholson who kept the storm at bay.

Slowly Henley managed to come back into the game and following the best move of the game the ball was worked from Nicholson out to the left where Andy Green’s cross was met by a reverse stick flick from Ewan Watkins into the roof of the Reading goal. Henley couldn’t build on the advantage and slowly but surely the younger legs of Reading began to tell.

Henley dropped deeper and deeper into their own half and the last quarter saw all the visiting side behind the ball and all hands to the pump. Newbold then picked up a green card and the pressure grew further.

From a short corner a shot seemingly going wide of the post struck Ward on the foot and despite vociferous and demonstrative objection by Henley players a penalty was awarded which Mike Cordrey was unable to save.

From the restart with Newbold back in the middle of defence Henley seemed stronger and made a break or two themselves but with the clock ticking down Reading were awarded a relentless series of short corners from which they eventually scored to make it 2-2.

With seconds left another short corner was awarded, the whistle blown for full time and what looked like the inevitability of a winning goal loomed. However, with one last surge Moore got to the striker before he could shoot and cleared the ball out of the D to the relief of the visitors.

HENLEY 5ths went down to a narrow defeat at against Abingdon 3rds at Jubilee Park.

The hosts took an early lead as Ian Rechner drove the ball through Abingdon’s defence to pass to Andy Farrow who fired home. Abingdon equalised from a penalty corner just before half-time.

In the second half Henley’s midfield and forward players created some good opportunities but despite Henley’s best efforts Abingdon managed to secure their win with a second goal.

Henley 5ths were set up this season in response to an increased interest in the sport. The team comprises a number of colt players aged 13 upwards and a growing number of experienced, older players keen to get back into playing regularly again. Captaincy of the side is shared jointly by Jamie Furness and Piers Edgell.

Training sessions take place on Tuesday evenings at Henley’s Jubilee Park from 7pm to 8.30pm where new players are welcome.