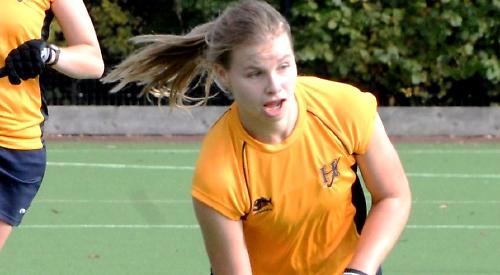 HENLEY Ladies 1sts scored five goals to move up to fourth place in the table away to local rivals Reading 3rds last Saturday.

The visitors started well managing to move the ball up the pitch, protecting the centre. Reading had some good passages of play down the line into Henley’s end quarter, but they were met with a strong defensive line which firmly challenged any of the hosts’ chances on goal.

Henley kept pushing up and after 13 minutes the visitors scored their first goal from a well-worked penalty corner by Kat Green and Louisa England, with England deflecting the ball into the top corner of the net.

Soon after Jemma Barham led a strong attack down the left hand side linking with England in the middle of the pitch who accurately pushed the ball forward to an awaiting Georgie Metcalfe. A one-touch shot by Metcalfe found the small gap between the goalkeeper and post scoring Henley’s second goal.

After 10 minutes, Metcalfe scored her second goal from a quick interception leaving her at the top of the D with a clean shot on goal to make it 3-0. Reading managed to convert from a penalty corner to make the score 3-1 just before half-time.

Early in the second half Charlotte Cockerton made a strong run from the halfway line beating numerous Reading players before calmly striking a reverse hit into the bottom left hand side of the goal.

The win leaves the amber and blues second in Division 3A.