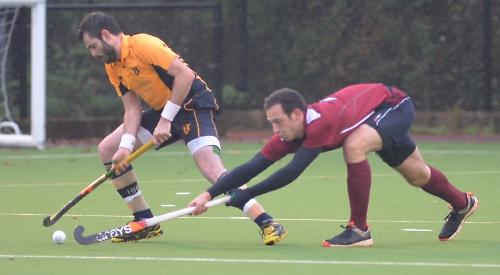 HENLEY 1sts went down to a narrow defeat at home to Milton Keynes last Saturday.

The match started evenly with few chances created by both sides. Henley looked controlled in possession, with Rob Mortimer providing some good passes to the midfield trio of Joyce, Hetherington and Harding.

The away side seemed content with playing territory hockey, throwing aerial passes down either flank and picking up any loose balls. This proved to be effective, and after 25 minutes Milton Keynes took the lead following such an aerial ball to the right wing, a first time cross, and far post deflection past Henley goalkeeper Roy Cox.

Minutes later Henley had a good opportunity to equalise as captain Ed Foster played an astute pass into Rhys Joyce at the top of the Milton Keynes D but his strike grazed the outside of the post.

The second half played out much like the first, with Henley with more possession and creative intent, but with Milton Keynes throwing aerial passes forward to gain territory.

On the hour mark the home side equalised with a wonder goal from Alex Land. The former Marlow captain beat two men, lifted the ball over the final defender’s stick and lashed an unstoppable half-volley into the top corner of the goal, the ball still rising at it struck the back of the net.

With 10 minutes remaining a concerted spell of possession resulted in a series of short corners, Milton Keynes snatching a late winner as a broken down short corner eventually found its way to the Henley goal through a series of Henley players.

Henley did have an opportunity to equalise with the last play of the match as Luke Gupta won a short corner on the stroke of the final whistle. The short corner was eventually snuffed out by the Milton Keynes goalkeeper and post defender as Joyce looked to get a touch on Foster’s flick.

A true top of the table clash, with Oxford in first and Henley in second position in the league, Henley knew that this would be the toughest fixture of their season so far – given their 10-1 loss earlier in the season to Oxford 4ths.

The game started at a brisk pace helped by rain which made the Jubilee Park pitch faster than usual.

While Henley looked solid, the home side needed time to adjust to some personnel and position changes from previous weeks. In the meantime, Oxford looked dangerous with a direct form of hockey. A series of opportunities came their way, both from penalty corners and open play but Earl seemed unbeatable, dispatching shots from all angles.

Lacking the usual fluency given the pressure from Oxford, Henley struggled to create clear opportunities themselves. Given the majority of the goalscoring opportunities had fallen to Oxford, Henley were fortunate that Earl’s performance meant that the score was still goalless.

Knowing that they would need to make some changes in the second half, Henley stepped up a gear and began to deprive the visitors of possession. Jack Draycott and Richard Nicholson started to dominate the central midfield, with Leo Packham and Julian Herbert looking increasingly dangerous on the left and right. The deadlock was broken by an individual goal from Sam Brown. A sharp move through Packham and Nicholson found Brown at the top of the Oxford area. Brown received the ball with his back to the goal, kept two defenders at bay, and then unleashed a powerful shot on the reverse side into the corner of the goal.

Oxford reeled from this blow as Henley looked to press forward their advantage. Soon after good work from Timothy Herbert and Brown found the Oxford right back under pressure, which resulted in a wayward pass straight into the path of John-Joe Cottam who calmly slotted the ball past the Oxford goalkeeper to make it 2-0.

With 15 minutes remaining, Henley continued to retain possession to frustrate the visitors, who were pushing hard to rescue the game as Earl continued to make a series of impressive saves. In the dying minutes, Oxford were awarded a short corner and managed to seize a goal back, but the resurgence came too late as Henley recorded their fourth successive victory, all of which have been by a margin of a single goal.

The result means that Henley and Oxford are both level on points at the top of the table.

HENLEY 3rds put in a good performance to secure all three points from their away clash at South Berkshire the previous week.

The hosts had lost narrowly to league leaders Oxford 3rds the previous week, so Henley knew this would be a tough fixture going into the game. The opening minutes confirmed that this would be the case, with the home side constructing some powerful attacking moves and looking particularly dangerous on the break.

Playing on a fast but bouncy pitch, Henley initially struggled to gain their normal fluency. However, the visitors soon found their rhythm and settled in to their game of slick passing and powerful hockey.

The opening goal came after good work from left wing Sam Brown, who found Ed Newbold. Newbold drove powerfully into the South Berkshire area, kept the defence at bay with sublime skill and then shimmied to find enough space to drive a shot into the bottom corner of the goal.

The home side quickly restored parity with a goal of their own, following another swift break.

In the second half Henley started to look more commanding as Jack Draycott, Richard Nicholson, John-Joe Cottam and Alex Price dominated the midfield.

With South Berkshire struggling to retain possession and starting to tire, Henley won a series of penalty corners. Marshalled by Woolfrey, Henley have looked very dangerous in the corner routine this season, and Woolfrey delivered a sharp flick which was parried into the path of Foster-Yeow who put the visitors back in the lead.

With the Henley defence becoming more authoritative with newcomer James Moore delivering a particularly strong performance, South Berkshire struggled to make an impact and Henley closed the game out to secure three points.