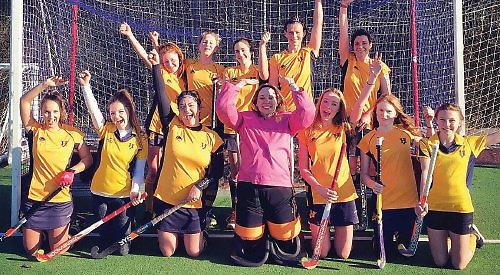 FACING a double-header weekend, Henley Ladies 1sts travelled to Eastcote on Saturday hoping to build on their strong performance from the previous week.

Henley started the first half with intensity, moving the ball quickly up the pitch. Skilful play from forward Kiera Holloran was rewarded with a penalty corner where the disguise pass from Kat Green to Louisa Engand saw the ball deflected high over the crossbar.

The Eastcote forwards, stretching the Henley defence were managed well by fullback Green and Eastcote were unable to convert their chances.

After the breakdown of a subsequent penalty corner and a good save from the Eastcote keeper, fast reactions from Green to convert saw Henley go into the second half 1-0 up.

After the break, Eastcote came out firing on all cylinders with a 10 minute spell Henley were unable to control as the visitors conceded two goals in quick succession from open play.

The powerful Georgie Metcalfe was able to equalise for the amber and blues, scooping the ball over the keepers outstretched pads enabling Henley to recover a point from match.

ON Sunday Henley Ladies 1sts travelled to Oxford for the third round of the national cup competition hoping to improve on their league encounter four weeks before.

Henley attacked up the pitch well, transferring the ball at pace but were unable to convert their chances. Oxford’s Dutch danger player was identified and kept at bay until she was able to step away from her defender to open the scoreline 15 minutes into the first half.

A penalty corner for Oxford, deemed to have finished by the umpires, saw what appeared to be a head-height shot be allowed and a second goal awarded. Henley responded, winning a penalty corner which the ever reliable Kat Green disguise, Louisa England deflection routine proved successful, leaving Henley one goal down at half time. In the second half wing backs Kath Draycott and Rachel Herbert attacked up the pitch, creating chances which Henley were unlucky not to convert.

Oxford created space behind the Henley defensive line and were able to score two more goals to ensure the hosts progressed in the cup.

HENLEY Ladies 2nds, playing their first match in their new shirts, ran out winners against Phoenix and Ranelagh at Jubilee Park.

The hosts got off to a strong start with plenty of attacking play as Beccy Barry and Emma England dribbled the ball through Phoenix’s defence.

Despite winning short corners, and failing to capitalise in open play, the game remained open. Although the majority of attack had been with Henley, at half-time both teams were in with a chance of securing all three points.

In the second half Henley again went on the hunt for the goal which continued to remain elusive. Phoenix stepped up the pace and Henley’s back line did well to absorb the pressure, with a few key saves from Channon.

Midway through the second half Henley attacked down the right and after the ball was crossed into the D several Henley sticks were waiting and Barry sent it across the line. Despite several scares and some tense defending of a short corner in the last five minutes, Henley held on for the win.

Following a few disappointing matches where the score-line hadn’t reflected the hard work and determination that the Henley squad put into their training, the hosts got off to a strong start, with their forwards pushing towards the goal and forcing Banbury into defensive play from the offset.

Sarah Drummond put Henley ahead, sending home a nicely placed ball across the goal mouth, ably supported by Rosie Wilkinson who was never far from the action.

Henley’s strong defensive quad of Esme Emmett-Walker, Rosie Kemp, Leonie Wheeler and Kayleigh Scott stopped Banbury from making any progress towards their goal whilst Banbury’s goalkeeper did a good job of stopping Henley adding to their score in the first half.

Early in the second half a long ball from Wendy McCloughlin was picked up by Ella Shute who set up a good ball for Hannah Webber and a second goal for Henley.

Tireless work from Meg Hearn, Imogen Bridge and Juliette Cottam in midfield helped prevent Banbury from getting any grip on the game and on the rare occasion that they slipped through, Lorna Greenwood produced some good goalkeeping and kept a clean sheet for Henley. A third goal came from McCloughlin, who picked up a good pass across the D from Tilly Carter.

• Henley followed their win up with another comprehensive victory as they beat Scarlet Runners 4-1.