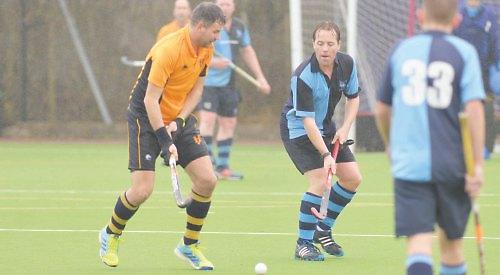 HENLEY 1sts moved off the foot of the South Premier League last Saturday thanks to a 4-1 win at Horsham.

Going into the match Horsham were one point above Henley and were backed by a large crowd under the floodlights.

The match started at a furious tempo, with tackles flying in from both sides in the opening stages. Henley looked more composed on the ball and created the clearer chances in the first half. New recruit Jonty Clarke went close twice following midfield exchanges between Taylor, Joyce and captain Ed Foster.

Henley’s early dominance was rewarded with a goal after 25 minutes as David Ralph played a give and go with Foster, who then found Clarke on the Horsham baseline and his head-high cross was volleyed home at the far post by the onrushing Alex Land, Henley’s top scorer so far this season. The score remained at 1-0 going into half-time.

The pattern of the second half reflected the first, with Henley reducing Horsham’s chances to scraps and Roy Cox keeping out any penalty corner efforts which the home side attempted. Ten minutes into the second half Henley doubled their lead as Clarke pounced on a loose ball in the Horsham D, and lifted the ball over the onrushing goalkeeper.

Henley then added a third goal, again through Clarke who dribbled down the left baseline and slotted the ball through the home side goalkeeper’s legs.

Horsham then replaced their goalkeeper with an additional outfield player where they decided to play him exclusively in his own D though, leaving him susceptible to a barrage of shots from a rampant Henley.

With five minutes to go Clarke was played through one-on-one with the kicking back by Joyce’s weighted through ball, the end result was his third, and Henley’s fourth goal of the day.

With one minute to play remaining Horsham got on the score sheet with a well-taken reverse stick shot into the bottom corner of the goal, with Cox unable to keep it out.

HENLEY 2nds, on the back of a seven-match losing run, got back to winning ways with a 4-0 win against Staines at Jubilee Park.

Henley started to take the upper hand after 10 minutes when new recruit Nico Jean-Jean and John Doyle provided vigour to the home side’s attack that has been missing recently.

On 15 minutes Henley broke the deadlock when good work by the forwards put Doyle into space and he obliged by slotting home.

The conditions didn’t lend themselves to an attractive game of hockey but Henley persisted and Rechner claimed a deflection via a cross from the right to put the amber and blues 2-0 up at half-time.

In the second half some individual skill from Jean-Jean put Henley 3-0 up with a reverse stick shot into the bottom right of the Staines goal.

Chances for either side came and went, until a few minutes before full time, when Doyle used his skills to score his second of the game and Henley’s fourth.

HENLEY 4ths extended their unbeaten run to five games with victory over Reading based Phoenix and Ranelagh 3rds.

With six changes from the winning team of the previous week, it was on paper a stronger Henley team including a return for prolific scorer Tim Cima playing his first game since October.

The game started with a lack of cohesion with many passes going astray and opportunities to exploit gaps in the Phoenix defence going begging.

Slowly Henley started to find their rhythm and the midfield trio of James Lane, Jamie Hollins and returning skipper Simon Taylor were in ascendancy and the game was now being played extensively in the Phoenix half.

The pressure mounted and inevitably the opening goal was scored by Cima, a well taken opportunity picking up a poor hit out of defence and running hard on goal with a sharp shot past the keeper.

Having taken the lead the hosts let Phoenix take the initiative and moments before half-time following a poor clearance from defence a hopeful shot on goal found its way into the net.

Early in the second half a move down the left found Phil Biggs free in the D and his movement to goal was blocked by a stick tackle. There followed a sequence of short corners and finally from the third Cima and Hollins combined before Cima found the net for his second of the match.

Henley were in control of the game but wary that a repetition of the lapse in concentration from the first half would bring Phoenix back into the game, but with Newbold, Williams, Ward and Warner stepping up to the challenge in defence, it was clear Phoenix were going to be shut out.

Henley increased their lead with a second of the season for Lane, slotting home following good work in midfield by Taylor.

The last 10 minutes were played out with Henley fully in control as they moved up to fifth place in the table.

Harrow managed to steal an early lead after 15 minutes. Henley hit back quickly as Ian Rechner skilfully dribbled the ball through the Harrow defence and deftly lifted the ball in to the back of the net to make it 1-1.

The home side regained the lead with a goal just before half-time.

Early in the second half Henley equalised once again when, from a short corner, Ian Rechner stopped the ball before passing to Jon Grocock who made a square pass to David Corke who fired home.

Henley continued to play well and maintain pressure on the home side with junior player Henry Davis controlling play in midfield.

The visitor took the lead when Ian Rechner took the ball up through the midfield before finding Jamie Furness who passed the ball across the D where a full-length diving strike from Andy Farrow sent the ball into the goal and hard against the back board.

Harrow stepped up their pressure on Henley in the final quarter with goal keeper David Rechner pulling off several good saves, one of which was cleared off the goalline.

The home side, with three substitutes on hand, kept up the pressure before eventually equalising and then adding another goal to take the lead.

Henley fought back for an equaliser and eventually David Corke stabbed the ball home to earn the amber and blues a share of the spoils.