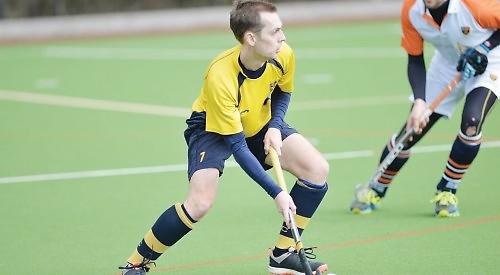 HENLEY slipped to a 2-1 home defeat at home to Oxford University last Saturday.

The home side started the game full of energy with the visitors struggling to cope with the high intensity Henley press, winning the ball multiple times in the Oxford half. One such press led to Ed Foster winning the ball in the opponents’ half, his early ball found Chris Green on the baseline who duly pulled it back to David Ralph to convert into the bottom right hand corner to give the amber and blues the lead.

The early goal spurred Oxford on who forced several good saves out of Henley goalkeeper Roy Cox and last ditch defending from Robbie Mortimer and Sam Heaver kept the score line at 1-0 at half-time.

Henley started the second half the stronger of the two sides and a good run from Alex Land led to him being one-on-one with the keeper but the home player slipped at the last moment trying to pass the ball to an open Ed Foster at the back post which allowed the keeper to smother the ball and get it away to safety.

Minutes later Land had another chance. Some good work from Rhys Joyce and Luke Gupta down the right, led to Hetherington firing the ball into the Oxford D. After some pin-balling around, the ball fell to Land on the penalty spot who hit a reverse straight stick shot towards the empty goal, only for the visiting keeper get his stick to it and deflect it wide.

At the other end Oxford were reduced to breakaway attacks but their young team were starting to find holes in the tiring Henley team. One such breakaway led to Oxford winning a short corner which was duly dispatched into the bottom right hand corner to make it 1-1 with 20 minutes to go.

Coach Ian Heggie rang the changes trying to spark the Henley team into life and it almost worked. First a good ball from Rhys Joyce found Geoff Joseph in the D who deflected the shot towards the far post only for the keeper to somehow get his stick down and deflect it round the post. Minutes later, after good work from Joseph, he found Land open at the back post but he could only push his shot into the keeper.

The turning point of the game came with five minutes of the match remaining. Another breakaway attack from an Oxford forward found a team mate unmarked at the back post who duly popped the ball into the open net to make it 2-1 to Oxford.

Oxford’s defence managed to hold out for the rest of the game to secure all three points.

HENLEY 4ths’ unbeaten run came to a shuddering halt at Headington School on Saturday when an Oxford 8ths team, on the back of a 0-0 draw with the bottom-of-the-table side, surprisingly overran the visiting amber and blues side.

The first 10 minutes showed no outlook of what was to come as Henley started strong and were able to take the lead with a well taken goal from Tim Cima.

Oxford started to rotate their team and take advantage of a number of substitutions on the bench and the game turned. Within minutes the home side were level following a mix-up in the Henley D between goalkeeper and fullback, failing to clear the ball and the Oxford striker pouncing on the uncertainty.

This set the tone for the remainder of the first half and as Henley sat deeper and deeper in defence the pressure from Oxford grew and in no time the home side were 3-1 to the good.

Tactical changes were made and the ship steadied with Cima able to score a second to raise hopes, but on the stroke of half-time a breakaway goal from Oxford restored their lead and half-time came with the home team 4-2 up.

The second half brought new resolve for the Henley team and for the first 20 minutes were again the better side, but chances were now going missing, Jon Grewcock and Adam Warner both having opportunities to score whilst Cima was denied a hat-trick by the Oxford keeper’s head.

With no subs and a couple of players now carrying injuries Henley started to tire and the inevitable was forthcoming, two quick breakaway goals from Oxford making the margin somewhat harsh on the Henley team.

With minutes to go Cima pounced and scored the goal of the game to secure his treble.