England is the hat-trick hero for visitors 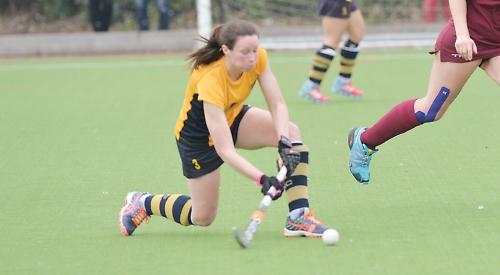 HENLEY Ladies 1sts came away with all three Division 3A points as they triumphed at third-placed Oxford Hawks last Saturday and maintained their good form.

Henley started slow and soaked up a lot of initial pressure from Hawks with good defensive play from Kat Green, Rachel Herbert and Chloe Nelson. Both sides earned themselves short corners but neither was able to convert and it was 0-0 at half-time.

The second half was a different matter with Hawks scoring in the first two minutes. This seemed to rally Henley who managed to earn a short corner from some well worked attacking play from forwards Sophie Hoskins, Georgie Metcalfe, Keira Halloran which was deflected past the keeper by Louisa England. A minute later this was followed up with another corner, which again ended up in the back of the net, again by England. Henley kept the pressure on with some well-timed runs by midfielders Ellie Roseff, Emma Walker and Charlotte Cockerton. It was this pressure that led to another short corner and again this was deflected past the keeper by England, earning her hat-trick. This did not stop Hawks from continuing to pressure the Henley defence and managing to sneak through for a consolation goal. Ellie Roseff was named Henley’s player-of-the-match.