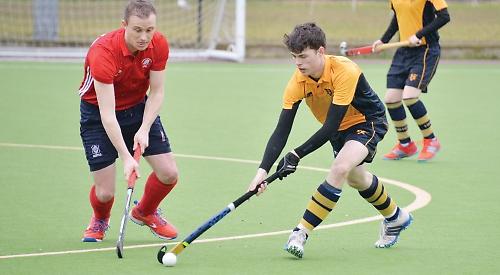 With fixtures against Newbury usually tense affairs which Henley usually came off second best, it was a welcome change in fortune that saw the hosts triumph.

A strong line-up and some experimental position changes came together well as Henley capitalised on a slow start from the visitors by dominating the midfield match-ups. New central midfielder Matt Herbert was impressive both in his defensive and attacking roles, by linking up well with James Baker to make progress difficult for Newbury to create anything meaningful but also to provide a platform for the home side to build opportunities up front.

The home team always looked the more likely to score first and it came from a penalty corner won and converted by Doyle. This lifted the team’s confidence and they started to play with flair and ambition which paid dividends soon after when skipper Herbert drove down the right to win another penalty corner, again scored by Doyle from the top.

In the second half Slay at centre back rode his luck a couple of times after being double-teamed by the Newbury forwards, but he used his skill and experience to get himself out of trouble.

Frustrations at some umpiring decisions rose to the surface for Newbury as they found their extra pressure not turning into goals, and Henley had enough chances of their own to close the game out as they drove into space behind the high visiting defence.

The pressure was relieved for Henley when James Rechner latched on to parried save to put his side 3-0 up.

Henley’s defence was finally unlocked by Newbury down the left. The visitors then launched an all-out offensive, only narrowly missing a few times and finding captain Herbert on the goal line to clear wide after keeper Bowyer was beaten.

A LAST-GASP save by goalkeeper David Rechner ensured hosts Henley secured a point from their 3-3 draw at home to Wallingford 4ths at Jubilee Park.

It was the home side who started the strongest but despite some good overlapping play down the right flank by Phil Biggs and Simon Taylor the final ball to a Henley striker remained elusive. Wallingford opened the scoring with a fortunate goal, a free hit from the half way line taking a wicked deflection off a Henley stick and soaring through the home midfield and defence at shoulder height before falling at the feet of a visiting striker to slot home.

Minutes later it was 2-0 as Wallingford scored from a good short corner move, taking the Henley defence out of the picture with precise passes before a simple shot to score. Henley needed to regroup and find a way back into the game and with Ed Newbold upping the tempo to disrupt Wallingford’s game, they began to take control. Good play down the left by Neil Emmett and Leo Packham created an opening for Tim Cima who scored to make it 2-1.

With half-time approaching Cima again put pressure on the Wallingford goal and following a sharp series of passes with Jon Grocock beat the keeper to make it 2-2.

For the first 15 minutes of the second half the result was constantly in doubt, Wallingford still looked strong going forward and Henley were seriously in debt to some fine defending by Simon Ward to keep the scores level.

At the other end of the pitch Henley just couldn't find the net, twice Cima was through one on one with the keeper and twice he was thwarted by fine goalkeeping.

Wallingford then broke away from the Henley midfield and managed to create an overlap on the left resulting in a tap-in goal.

With five minutes remaining Henley players were calling for a short corner following two offences in Wallingford D but the umpire played an advantage and the ball found Packham unmarked on the left who took his time and calmly shot past two approaching defenders and the keeper to make it 3-3.

Wallingford attacked again and looked certain to score only for the Henley keeper David Rechner to launch himself from the goal line and clear the ball off the stick as the striker looked poised to score.