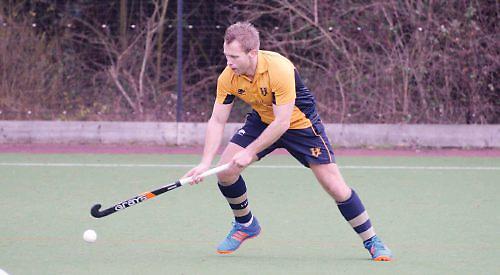 A LATE goal by Jeremy Clark ensured Henley all three points from their home match with Spencer last Saturday.

It was Spencer who started the livelier of the two sides putting Henley under pressure from the start and this was rewarded with a run of penalty corners being given to the away side, but they struggled to find the back of the net with the home side’s back-line holding firm.

Another penalty corner was awarded to the away side and this time the effort on goal hit a Henley defender in front of goal and a penalty stroke was awarded. The Spencer player flicked the ball but the stroke was saved by the in-form Henley keeper.

Henley began to find their touch after a slow start and were rewarded for their resilience with a runaway goal with some fancy stick work on the baseline by Clark and a sublime finish by striker Geoff Joseph.

Now leading 1-0 Henley began to find their stride with several fine moves down the right wing.
Henley pushed for another with a fine move in the middle of the park only for a midfielder to be
fouled but no penalty was given.

Spencer started brightly in the second half, pushing for the equaliser and swiftly found the back of the net. With the score at 1-1, Henley pushed to reclaim their lead but against the run of play, Spencer scored from a penalty corner to make it 2-1 to the visitors. Henley went straight on the attack and the ball was fired into the D by Joyce and a goalmouth scramble ensued with sticks flying everywhere, which resulted in a shot being denied by the foot of the Spencer defender. A penalty stroke was awarded which was tucked away by Joyce to level the scores.

The final 10 minutes became frantic with both sides pushing for the winner. Henley then counter attacked and the ball fell to Clark to fire home to restore the home side’s lead with just minutes of the match remaining.