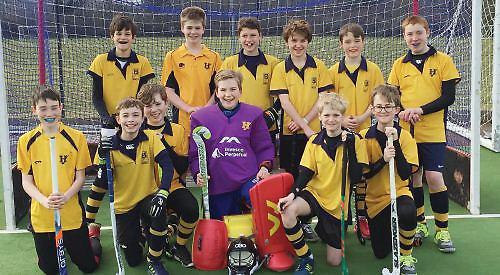 McAllister, who was thwarted three times early on by the Reading goal-keeper and a resilient Reading defence, finally found a way through to give Henley the lead but it was short-lived as the visitors used the right flank to good effect, passing inside for their striker to equalise.

Henley recovered quickly and McAllister, Toby Phillips, Charlie Shaw, Enzo Cheesman and Louis Poundall all had goal-scoring chances but were unable to make their pressure count.

The Reading defence was solid, protecting their goal-keeper who made several agile saves. Poundall, on the right wing, was ably supported by right back Huw Williams, and using Shaw and Will Johnson in centre midfield, they created lots of attacking opportunities.

Alex Bryant and Cheesman combined well on the left, making it difficult for the speedy Reading wingers to break through while Steve Rankin and Will Bonser were solid in central defence and had plenty to do in this end-to-end encounter.

The midfield encounters were dominated by Shaw and Johnson, who were able to push Henley forward as the interval approached. Toby Phillips and McAllister, both playing high up the pitch for Henley, continued to apply pressure and McAllister's netted twice more to secure his hat-trick before the half-time whistle.

Henley dominated the early part of the second half as a tired Reading struggled with the pace of the match, and the early resilience of the visitors’ defence was tested and defeated four times.

Man-of-the-match McAllister picked up his fourth goal, Phillips positioned himself perfectly for two close-range goals and Shaw's straight strike from the top of the D gave Henley a clear margin.

Henley's defenders fed Bonser in the middle of the pitch and his ball to Rankin was spot-on and set up the wide ball to right back Fergus Heggie, whose weighted pass found Poundall on the right wing. Two more goals followed from Henley. A clean slap from Phillips gave him a hat-trick and a reverse stick strike from Shaw earned himself a second. However, it was Reading who had the final word when a cross from the left into the D found a free attacker in front of goalkeeper Joe Selvester and the ball was whipped in to give the visitors their third goal of the match with seconds remaining.