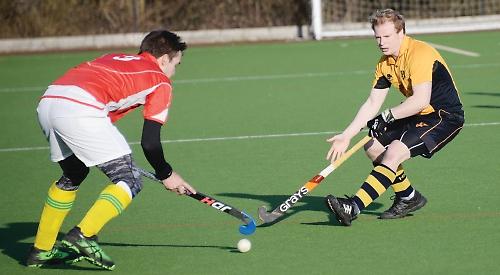 HENLEY 1sts picked up a much needed win against Indian Gymkhana at Jubilee Park last Saturday.

Indian Gymkhana, who were relegated from the National League last season, started the brighter of the two sides and were soon creating spaces behind the back four of Henley’s defence.

After 10 minutes Henley settled into the game and good work in midfield from Ralph and Gupta saw the hosts begin to see more of the ball.

Henley took the lead when Clarke caused confusion in the Indian Gymkhana defence and after getting to the baseline looped the ball to the back post for Chris Green to score.

The away side pushed forward and after creating numerous short corner opportunities finally levelled the game.

A good period of possession from Henley with Land and Foster seeing more of the ball soon created a short corner chance. Ralph stepped up and wrong-footed the visiting keeper with a measured strike into the middle of the goal to make it 2-1.

In the second half Henley continued to press and good transfer work from Heaver, Mortimer and Walter began to open up space on the flanks for Gupta and Taylor to exploit.

The visitors still looked dangerous on the counter and some confusion in the Henley defence allowed an Indian Gymkhana forward time to pick his spot and to level the game up once more.

Henley continued to press forward and a good period of play resulted in a short corner that Clarke pushed hard past the visiting goalkeeper to give Henley the lead once more.

The final goal of the match arrived with five minutes to play following a spell of good possession hockey from Henley. Captain Ed Foster received the ball in the D and a reverse strike saw the ball fly into the roof of the net via the inside of the far post.