Herbert strike keeps side in the hunt for promotion 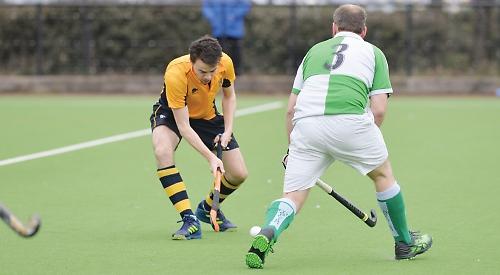 HENLEY slipped to a heavy defeat away at Old Cranleighans on Saturday.

Henley started brightly and were competing well on the slow pitch. Some good work down the left found Geoff Joseph high up the pitch but he was unable to find a Henley player in the D.

The rest of the first half was an even affair with Cox making some good saves in goal and Mortimer clearing one off the line. Henley went in at half-time 1-0 down after Old Cranleighans stole the ball in midfield and played a fast and effective counter attack.

In the first 15 minutes of the second half Henley completely lost their way, losing the ball too often, not tracking players and diving into tackles.

The hosts quickly rattled in four goals with some slick finishing and a couple of high quality short corners.

Soon after Henley started to play like they had in the first half again and began to create chances. Chris Green and Luke Gupta both finished off some fine moves that ended with Henley passing into the goal.

Old Cranleighans were playing free-flowing hockey with the game having opened up and scored another three goals. Joyce made it 3-8 with a penalty flick after Taylor had deflected Foster’s short corner hard push into the body of a man on the post.

Man-of-the-match for Henley was Luke Gupta for his tireless effort in midfield mixed with creativity in the final third.

Currently second in the league following promotion last season, Henley knew that a result against Wallingford would be critical to keep hopes of back-to-back promotions alive.

Wallingford started with pace and hunger, transferring the ball quickly across the back and driving forward with skill and danger. Winning a number of penalty corners, the visitors executed a series of powerful drag flicks. It was only thanks to the repeated acrobatic efforts of goalkeeper Ryan Foggoa that Henley managed to clear their lines.

It was then that a moment of skill changed the nature of the game. On the break and against the run of play, Timothy Herbert pounced upon a loose ball in the centre forward position and waltzed past two defenders and accelerated into the Wallingford area, drawing the goalkeeper, before unleashing an unstoppable reverse stick shot from a tight angle.

The midfield of Draycott, Packham, Nicholson, Cottam and Cheeseman began playing with more authority, working hard to break down Wallingford attacking moves. The defence also started to play with greater confidence with James Moore continuing his fine season with a powerful performance. In the second half a Wallingford attack overwhelmed the Henley defensive line and found an unmarked forward, who managed to scuff the ball into the goal to level the score. Henley could have secured the winner soon after as a sharp cross from Foster-Yeow was placed just inches away from the stick of Barrass racing in at the left post.

In the remaining minutes, the frenetic pace ebbed as both teams started to defend deeper, both satisfied to share the points.

HENLEY 4ths secured another convincing win away from home as they moved to fifth place in the table with three matches remaining after winning at Oxford 8ths.

The game started positively for the amber and blues and Martyn Watkins was unlucky not to score in the first two minutes as his snap shot was well saved by the Oxford keeper.

Oxford quickly turned defence to attack and caught out the Henley defence where a simple cross field pass found an Oxford player un-marked and able to score easily.

The early setback rocked Henley into action and slowly they began to take control but they couldn’t find a way past the impressive Oxford keeper who made a string of top class saves from multiple Henley attacks.

Henley were now camped in the Oxford 25 and finally managed to force a breakthrough with a scrambled goal from Jules Aplin to equalise. From the restart Henley again pressed and the ball fell to Phil Biggs whose shot from the top of the D found the corner of the goal to give the visitors a 2-1 lead at half-time.

The second half continued as the first had finished with Henley fully in control and attacking the Oxford goal. The number of saves from the Oxford keeper was now becoming a frustration for the Henley attackers. Finally the fortress was breached and Tim Cima scored two goals in quick succession following patient build-up play and good passing to stretch the opposition defence.

Oxford managed to force their first short corner of the game, from which a goal-bound shot struck Ian Rechner on the foot for a penalty to be awarded. The Oxford skipper duly scored to make it 4-2 with 10 minutes to go.

Rechner pushed forward and took the ball deep into the Oxford D where he unselfishly passed to Aplin to finally put the game beyond Oxford. With the clock ticking down Cima completed his hat-trick, jinking into the D beating three defenders and sliding the ball past the keeper.