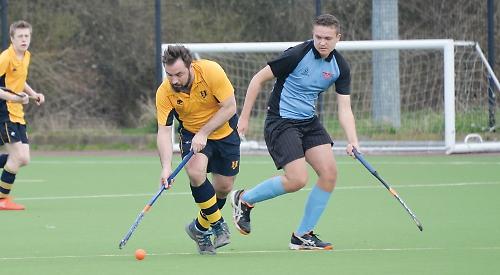 HENLEY 3rds headed to Oxford on Saturday for a winner takes all showdown, a victory would see the amber and blues achieve back-to-back promotions under the leadership of Rowan Austin, with Oxford knowing that the draw or a win would see them take the final slot along with league winners Wallingford. However, a 2-1 defeat saw Henley finish third.

The visitors were weakened and fielded a bare 11 and without several regulars, including exiting skipper Austin and the venerable Jack Draycott.

With the change of personnel Henley switched to a more conservative 4-4-2 formation, rather than the successful 3-4-3 that has seen them win 12 of their 19 games to date.

The change worked well with Henley’s backline repelling a series of attacks, often orchestrated by Oxford’s stand-out middle of midfield playmaker. Richard Nicholson, in the unfamiliar role of centre back and James Moore performing admirably. In midfield the younger legs of Beaumont and Cheesman harried and pressed to great effect while veteran Price added touches of guile and steel.

Henley hung in, defended well and looked to mount the occasionally foray into opposing territory. Cottam’s direct running was a constant threat as was Cheesman’s ability to carry the ball at pace. Up front the combination of Herbert older and younger linked to fashion chances and a few short corners.

Henley’s short corner routines have been effective this season, but with changes to both stopper and injector, things misfired just at the wrong time.

Henley’s plans to get to the three-quarter mark and then go for it were derailed as Oxford scored a well worked corner on 60 minutes, beating the keeper Cordrey with a reverse stick strike. Cordrey had been on his A-game and it took something special to get past him.

Shortly after Henley were down to nine men with both Moore and Cottam sin binned. On returning to a full 11, Henley reverted to a more attacking 3-4-3 and were rewarded when Cottam found Woolfrey, his agile turn and finish levelling the score at 1-1.

Henley pressed for a winner and were presented with a late short-corner but Herbert’s strike was too high. A combination of the pressing and hard work in the previous 70 minutes saw Henley shorthanded at the back and Oxford scrambled home a winner with the last touch of the game.

HENLEY 4ths, weakened by Easter holidays and a couple of long-term injuries, were put to the sword by a strong Thame team at Jubilee Park on Saturday as they went down 12-0. However, after the game it emerged that the visitors had fielded several first team players that play their hockey six divisions above Henley 4ths.

As this was a breach of league rules the outcome of the match was subsequently reversed and Division 9 West mid-table side Henley were awarded a 5-0 victory against their promotion-chasing opponents.

In the one-sided match that took place Thame raced into a 3-0 lead inside the opening three minutes. The visitors dominated the remainder of the half to go in at half-time 8-0 up.

With no substitutes available there was little that could be done to change the course of the game but regular keeper David Rechner, injured and watching from the sidelines, bravely stepped up and took over in goal. Thame were still rampant and netted a further four goals in the second half.

HENLEY 5ths had the edge over their fellow mid-table opponents Eastcote Eagles in their penultimate match at Jubilee Park last Saturday.

From the first whistle, the visitors pushed hard up into the home team’s 25 yard line and had an unsuccessful shot on goal.

A clearance by Nick Shuttleworth in defence sent the ball up to midfield where the home team took the opportunity to advance forward and pile pressure on the opposition.

Good pace up the left wing with and some fine stick-work in the Eastcote 25-yard line culminated in the Evan Bowyer opening the scoring after 20 minutes.

The Eagles made a couple of promising challenges into the home teams half, eventually managing to equalise with a well targeted shot from the top of the D shortly before half-time.

The second half saw an early goal from Ian Rechner, who successfully overcame the experienced Eastcote goal-keeper to help Henley pull ahead again.

Again, Eastcote wasted no time in re-forming their offensive shape and managed to overcome the Henley defence to equalise.

Both teams pushed hard in to the final quarter of the match but victory for the home team was eventually sealed for Henley by Alan Mortimer within the final 10 minutes of play.