Henley 2nds run ragged by side with fresher legs 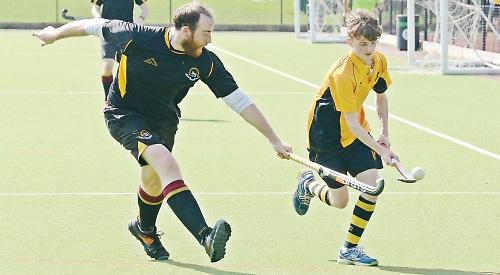 A LACK of reinforcements eventually told for Henley 2nds who were up against a side in Old Merchant Taylors 2nds needing three points to avoid relegation from MBBO Division 1.

Indeed, the visitors were clearly up for the challenge, arriving at Jubilee Park with 15 players to Henley’s 11, which gave them the edge in the fitness stakes.

But it was Henley who registered the first attacks of any note as Taylors appeared to struggle to get the best configuration of players on the pitch.

Tim Herbert and John Doyle created problems for the defence with their pace and skill while Measures and Pratt were too strong for Taylors midfield but when they did get the ball into the Henley circle the defence with Bowyer in goal stood firm which led to some frustration for the visitors.

The breakthrough came when Taylors had a penalty corner, which they slipped to the left, allowing the striker to score from a narrow angle.

Henley replied soon after when a miscued drag out from a penalty corner came to captain Dan Herbert who took the ball to the right and fired through a crowd to find the backboard.

However, parity was not kept for long after another penalty corner restored Taylors’ lead just before half-time.

The visitors pushed players further up the pitch to put Henley under pressure straight from the restart.

This tactic did not immediately bear fruit as Henley stifled the attackers of service but their ability to deploy fresher legs was too much for the hosts to cope with and stretched their lead to 3-1.

A potential turning point for Henley was gifted through a comical misjudgement by Taylors’ keeper who appeared to dive over John-Joe Cottam’s weak shot to make it 3-2. Spurred on by this, the hosts played with a flair and enjoyment which rattled their opponents but eventually they ran out of steam.

Henley received a sucker-punch when Taylors broke quickly down the right and found a way through to the goal from the ensuing penalty corner.

Undaunted by this, Henley pulled another goal back, again through Cottam, though this time with a powerful shot. But with the clock running out as fast as Henley’s puff, the visitors sealed victory with a fifth goal.

HENLEY 5ths recorded a convincing win to bring their MBBO Open Division 9 campaign to a close on Saturday.

Playing at their home ground at Tilsley Park, Abingdon were quick off the mark in assuming possession of the ball, culminating in a goal in the opening minutes of the match.

Henley then worked hard to win possession of the ball and to take the fight up into Abingdon’s half.

The visitors had their first break when forward Jamie Furness sent a strike inches wide to the left. Moments later, he had the ball again and took his second strike, this time, ricocheting the ball off the post and out of play.

It was third time lucky for Furness, who again took a shot but this time tucked it just inside the post to bring the scores level at half-time.

Henley started strongly after the restart, earning a short corner. Midfielder Ian Rechner took the first shot on goal but it was the deflection off Furness’s stick, sending the ball in to the top of the net, that gave Henley their second goal.

The visitors then piled on the pressure. This time it was junior player, Elliot Fielder, who within the space of 10 minutes managed to put two balls past the Abingdon goalkeeper, taking the score to 4-1.

Approaching the closing minutes of the game, Henley won a short corner and all the their players went up into the opposition’s 25-yard area.

Receiving the ball in the short corner, it was Ewan Watkins who took a clean strike at the ball, sending it crashing against the top of back-board to make it 5-1, moments before the final whistle.