England ladies are second best to Henley men’s side 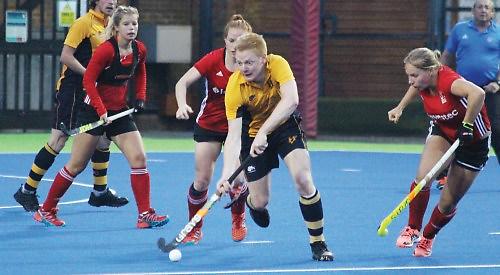 HENLEY’S men’s first team put in an impressive display to defeat the England women’s team in a friendly match at the National Sports Centre at Bisham Abbey .

The Jubilee Park side were invited to play the match on Tuesday of last week as part of the England side’s warm-up for the World Cup that takes place in London next month.

After four successful years as skipper Ed Foster handed over the mantle to previous vice-captain Jonny Taylor for his first match with the armband.

With manager Ian Heggie also stepping down at the end of last season and player/coach Rhys Joyce on holiday it was left to Taylor and new coach Danny Newcombe to organise the out-of-season team.

The game started evenly with both teams creating good chances and Rob Green in goal for Henley making several good saves from the England short corners.

A well worked passing move up the right-hand side by Henley ended with Steve Harding finishing coolly into the corner to put them 1-0 up after the first quarter.

The second quarter was just as fast-paced with both teams converting short corners, Luke Gupta with his trademark finish for Henley.

The amber and blues were stepping up their attacking threat and went 3-1 up through left back Ed Hughes-Burne. Henley took more control in the last two quarters with Sam Heaver, Tom Walter and Danny Newcombe defending well outside the D and playing well around the back. Benji Hetherington won many 50/50 battles in midfield while Gupta, Taylor and Foster were holding the ball up well further up the pitch to help Henley’s tired legs.

The England sides fitness and strength showed towards the end of the game, with Harding seeing a card for a late challenge. Green finished well to get his goal and England got another one back late on but Henley’s men held on for the win. The teams then followed the match up with penalty shuffles, Newbold and Hetherington both converting for Henley before Walter’s reverse-stick strike was disallowed for a back stick. England went on to convert and win 3-2.