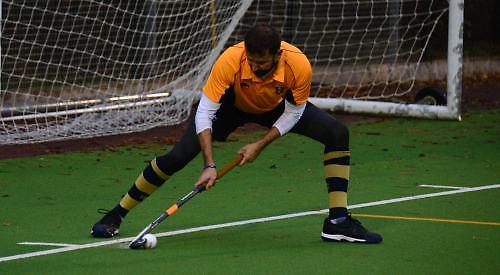 A DEPLETED Henley side lost out at Tulse Hill and Dulwich last Saturday in their Premier Division 2 West encounter.

The match didn’t start well for the visitors who found themselves 3-0 down inside 20 minutes.

Henley, with many players being forced to play out of position, were slowly finding a foothold in the game. After some sharp saves from keeper Ryan Foggoa, the visitors scored their first of the game; some neat passing between Smith and Taylor who then found Matthew Herbert on the far post who unselfishly squared the ball to Green for a tap in.

The second half was a lot more promising from Henley with Foster finding the ball in space and Charlie Shaw creating chances down the right wing. One of the mazy runs from Shaw resulted in him finding Green in the D who calmly slotted home for his second of the game.

At 3-2 the game was all to play for but unfortunately for Henley, Tulse Hill’s extra four substitutes gave them the advantage as legs began to tire. Tulse Hill scored another goal on the break to wrap up the three points.

HENLEY 2nds ran out winners in their top of the table clash with Eastcote 2nds at Jubilee Park.

The hosts started the match brightly, moving the ball around the pitch and creating chances with free flowing high intensity hockey.

The Henley goalkeeper made a couple of good saves whenever Eastcote threatened and finally the home side broke the deadlock with a well worked short corner routine with Tom Walter flicking the ball into the corner of the goal.

Henley went 2-0 up when the ball was played into Daniel Jones who fired it goalwards for it to be deflected out of the Eastcote goalkeeper’s reach. This was Jones’s first goal for the side.

Eastcote threatened with their direct approach and strong forward play and eventually they won a short corner and after an initial save from Henley the rebound was struck low into the goal to reduce the deficit to 2-1.

Henley started the second half on top and dominated both territory and possession without being able to finish off the game. Half way through the second half Jody Measures put the match beyond reach of Eastcote with a strike from the edge of the D which was too accurate and powerful for the visiting goalkeeper.

The home side continued to pass the ball around, stretching play and creating chances. Eastcote earned a couple of penalty corner chances but solid defending along with a goal line, head height save from defender Tom Bodeker kept the Eastcote offence out.

Walter completed the scoring when he netted his second of the game late on. Showing the composure that he displayed all afternoon he rounded the grounded goal keeper and flicked the ball into an empty net.

HENLEY 4ths lost out at home against Oxford 8ths in a high quality fractious encounter.

Fielding a mixture of youth and strong older players, Oxford almost took the lead after 10 minutes when their centre forward took the ball at the top of the D and smashed a fierce shot towards the top corner, only for goalkeeper Tom Grocock to pull off a good save, deflecting the shot over the bar. However, Henley’s defence couldn’t hold out, with Oxford soon taking the lead following a period of concerted pressure.

As the game settled down, Henley came to terms with the Oxford front line as the home side got on the front foot and scored two goals of their own through Danny McAllister from open play and Mike McAllister from a short corner.

Henley’s lead was short-lived when, after a poor clearance, Oxford levelled just before half time. After intercepting a pass in midfield, Oxford pushed players forward, winning a short corner, which was converted by their centre forward. The second half started evenly, with both sides threatening to retake the lead and, whilst Henley looked to take advantage of the visitors being reduced to 10 players following a yellow card, they couldn’t find the final touch in front of goal.

Oxford then took the lead from open play and, as the hosts pushed forward for an equaliser, the visitors capitalised on a breakaway, forcing multiple saves from the Henley keeper before scoring their fourth goal in the final minutes.