Skipper bundles ball over line to earn side share of spoils 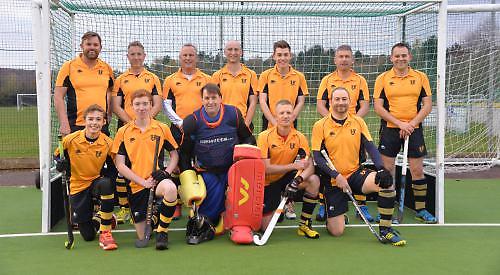 HENLEY 1sts came from behind to secure a point in their high-scoring Premier Division 2 West clash with Chiswick at Jubilee Park last Saturday.

Chiswick started the game at pace, pressing the Henley back line hard and fast. Henley quickly found themselves 2-0 down and struggling with the tempo of the game.

Early cards were handed out for a number of repeated inappropriate stick tackle offences and by half time Henley had managed to bring the score back to 3-2. Jeff Goseph tapped in at the far post and Chris Green netted while the visitors added a further goal to their score.

In the second half the hockey remained frantic, both teams grabbing two more goals, the home side through Luke Gupta and Nico Jean-Jean.

With four minutes of the match remaining Henley took their goalkeeper off as they chased the one goal deficit. This gamble paid off as a ball by Joyce was flicked up at head height into the D, Foster appeared to play a cut shot towards goal before captain Jonathan Taylor tumbled across the line in an attempt to prevent a Chiswick player stopping the ball.

HENLEY 3rds delivered a lacklustre performance as they went down 3-0 against South Berkshire 3rds at Jubilee Park.

Stuck in a poor run of form and lacking key playmaker and leading goalscorer Tim Barrass, Henley started slowly and could not generate any incisive attacking moves.

South Berkshire looked dangerous, switching the ball quickly and penetrating the Henley area frequently though some impressive saves from goalkeeper Ed Hems initially kept the home side in the game, an opener for the visitors came following a fast counterattack.

Henley continued to squander possession and make basic errors, giving South Berkshire increasing confidence and dominance. The only positive for the home side was Alex Price, who did his best to rally his ailing side. Another goal gave the visitors a 2-0 lead at half-time.

Henley went 3-0 down early in the second half after a fine move by the visitors found their centre forward at the far post for a tap in.

At 3-0 down there was no way back for Henley as legs started to tire. This defeat left Henley languishing at the bottom of the table in MBBO Division 3, having accumulated just three points from three drawn games in the last eight matches.

HENLEY 4ths moved back to the top of Division 8 West with a 7-4 win away to league leaders Witney 3rds.

Following a sluggish start, which saw Henley go 1-0 down after some good skill by the Witney playmaker, the visitors settled and began to play to their normal structure, drawing level through a well taken goal by Max Hems.

This was soon followed by a goal from a short corner, with Jon Grocock bundling in the rebound after a slick short corner routine.

The Witney midfield was strong and the home side soon broke forward in numbers, with the resultant overload giving Tom Grocock in the Henley goal no chance. Henley again took the lead through man of the match Max Hems before an interception in midfield led to another overload, with Witney drawing level at 3-3 just before half time.

Whilst the visitors set out to take control of the second half, it was Witney who re-took the lead with an efficient short corner. Although heads could have dropped, Henley grasped hold of the game, controlling midfield, working hard to shut down the Witney attacks and creating space down the two flanks.

With extra height and width to their play, and a tiring home midfield, Henley scored four goals in quick succession; a penalty stroke by James Rechner after his original shot on goal had been blocked by a defender’s leg, a strike across the keeper by the same player from a short corner, Ian Rechner calmly slapping a chest high deflection down into the goal and Martyn Watkins, having only just entered the pitch, being in the right place at the right time to finish a well worked move down the left.

Henley 4ths now sit back on top of the table on goal difference.