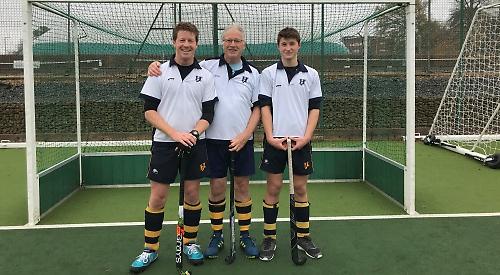 Jon Edgell, from Wargrave, played on his 75th birthday and was joined by his son Piers, 44, of Makins Road, Henley, and grandson James, 13.

The grandfather played about 10 minutes as the team recorded a 2-1 victory against Phoenix and Ranelagh 3s, the men’s former team, at the University of Reading.

His son said the club regularly fielded teams where fathers and sons played together but he didn’t know if three generations of the same family had ever been in the same side.

Piers, who captains the Henley team, said: “Dad stepped in at the last minute. He hung up his stick about 10 or 15 years ago but once I got back into playing and my son started playing a couple of games he wanted to start again.

“There are lots of other dads who play with their sons but to have three generations playing an official league match is a testament to dad’s keeping going and his enjoyment of the game. It’s quite an accomplishment really.

“It’s great to have him on the team and he seems to be a lucky mascot as we have won every single game when he has played.

“Maybe I won’t allow him to retire just yet — the season finishes at Easter.”

The Henley team conceded with about 10 minutes of the game gone before hitting back with two goals themselves.

Piers, who works in IT, said: “Dad didn’t play the full match. We brought him up for the final part of the first half and a little part of the second half.

“He probably had one long ball and charge up the left but didn’t score. He was still absolutely delighted to be there and part of the team and on the pitch at the same time as us.

“It was a normal league match but just because it happened to coincide with his birthday, he was quite keen to play and also because we both used to play for Phoenix. Because I needed a win last week, I wasn’t quite sure I could cope with him on the field but actually we had plenty of space and he did his bit to help us get our victory.

“The opposition were aware we were going to play him and we had a bit of banter about it beforehand.

“When my dad ran on to the pitch, I think they thought it was time to try to take the advantage.”

The men enjoyed meeting up with some of their former friends and team mates, including James Mutton and Bruce Boyce, who play for Phoenix, and umpire Michael Penn-Collins.

Jon, a retired accountant, used to be the leading scorer for Phoenix when he played for them about 20 years ago.

He said: “It was a magical moment to play with all three of us and, of course, we were playing the club that I used to belong to.

“I’m going to retire now. My reactions aren’t so good and the young people who play these days are so much better and fitter than we were.

“If I had not done this I would still be wanting to play one more time. I can retire with honour and a win and I’ll go along and support the team in future.”

Piers said: “We used to play with Bruce and now we were playing against him. It was good fun and great to see some old team mates still running around.”

Piers said James, a pupil at Leighton Park School in Reading, had enjoyed playing with his father and grandfather.

“My son plays every week and enjoys the game and to him it was just a normal game,” he said.

“He did say it was quite funny to be calling out to his grandpa for a pass though. You don’t normally hear someone saying ‘grandpa’ to call for the ball.

“Afterwards we went out for a small family meal at the Three Tuns in Henley.

“Dad has now given away his hockey boots but he’s holding on to his stick. Read into that as you may. If we have a friendly fixture we might try and wheel him out again.”