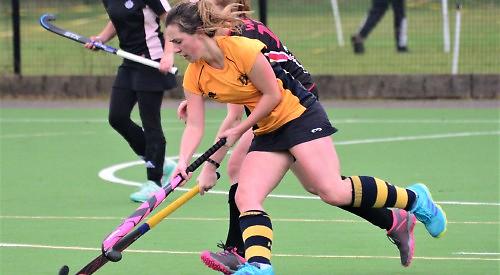 From the start Henley put pressure on Hawks’ defence giving them few options to work the ball out of their half. Jem Mackie and Ellie Roseff linked up in the middle to work the ball out to Henley’s front line and the hosts took the lead through captain Georgie Metcalfe.

Having gone a goal down, the Hawks started to up the tempo but Henley’s cool and collected defence of Sophie Hoskins, Mel Joyce, Katie Knight and Chloe Nelson kept them out of their attacking circle with some solid tackles and skilled transfers. Hawks continued their attempt to equalise and a quick break put them level.

Henley’s midfield of Charlotte Cockerton and Meg Moran made some strong and technical carries to create opportunity for Henley’s forwards to keep the pressure on the Hawks. Several shots at goal were saved by the Hawks keeper but Henley did not give up and a strong turn from Kiera Halloran in front of the keeper put the hosts 2-1 at half time.

The Hawks came out hard against Henley at the start of the second half winning multiple short corners, they managed to convert putting them level again. This did not last long as another skilful attack from Henley saw Lettice Cary at the top of the circle, and a powerful strike put Henley 3-2 ahead. Soon after another penalty corner to Hawks saw them draw level again at 3-3.

With only a few minutes left to play Henley broke away again with player of the match Metcalfe at the top of the circle where she fired home to secure the win and three points for the hosts.

HENLEY LADIES 2nds were held to their third successive draw, this time at home to league leaders Slough 2nds.

Henley started strongly with forwards Ali Jean-Jean and captain Emma Buckham-Hedges piling on the pressure straight from the off and with Sophie Rogers playing her first game back after having had her first child in the summer, there was plenty of experience up front.

Wave after wave of Henley attacks were pushing Slough all the way. Young defenders Billie Moore and Lucy Herbert were soaking up aerial pressure and Slough attacks and the team were looking strong. Midfielders, Wiz Chambers and Orla Brown took turns to make surging runs down the sidelines and were instrumental in keeping the pressure down Henley’s attacking end whilst any attacks Slough began to put together were soon snuffed out by Karen Walker and Rachel Herbert in the centre at the back.

Pippi Heath and Becky Barry, who have grown in confidence and strength week on week, were regularly frustrating the Slough players — pinching the ball and turning over the play. Henley had a number of chances, with Herbert senior piling in some fast balls that Hedges almost converted on more than one occasion. Despite all the pressure the score was goalless at half time.

In the second half Henley continued to be dominant and continued to covert this pressure into shots on goal and began winning more penalty corners. It was from one of these that the ball was injected to Karen Walker who nudged the ball in for Rachel Herbert to slam goalwards, giving Henley their longed for goal. Shortly afterwards the game turned end to end for a spell and 10 minutes from time Slough won a penalty corner. Their striker put in a strong strike which deflected past keeper Nicky Hardy, and despite Karen Walker’s best attempts — and use of her knee cap — the visitors had equalised.